Super Rugby format - deal with it!!! 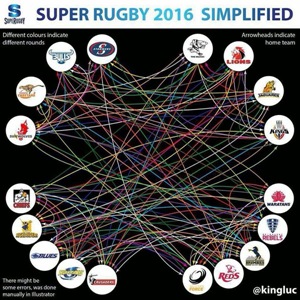 It’s Irish squad announcement day (plus I just learned it’s “Conor O’Shea to leave Quins announcement” day) so the attention will be slowly shifting from Europe to the Six Nations over the next week or so.  First, a few thoughts on Super Rugby 2016 which kicks off at the end of February.

They are going with a new format this season, and as you can see from the copy/paste at the end of this piece, explaining it involves a lot of words.

Just going by articles and tweets and such from the southern hemisphere, there seems to be a body of opinion among journos, fans, coaches and players that the new status quo is too clunky and unwieldy, with the prevailing complaint being that it’s not a fair league competition unless everyone plays everybody else.

Take the Pro12 for example.  Everyone plays everyone else home and away.  Does that alone make it a level playing field?

You can’t just moan about a new format being complicated without trying to appreciate the reason for the complications.  They sure aren’t doing it for the sake of it.

This way helps introduce regular top flight rugby to both Argentina and Japan.  That has to be a good thing.  Perhaps there could be unfairness issues, particularly in the Pumas’ case, with the fact that having virtually all their national side together for so long it is bound to benefit them at Test time.  But then again they have been shut out for so long I say a couple of years enjoying this advantage can’t be a bad thing.  Meanwhile, the Pro12 finds itself shackled by its very name when it comes to expansion.

Splitting the competition up into conferences helps with a view to media markets.  The way the Pro12 is set up now creates the possibility, for example, that only the four Irish provinces reach the playoffs.  Obviously that would be wonderful for us in the Irish bubble, but it would be a disaster for the league.

The new Super Rugby format pretty much guarantees that at least one team each from NZ, AUS and RSA not only reaches the playoffs, but also has at least one of those post-season games at home, which would keep the TV networks interested in all three regions.  Of course I’m not in favour of the game being totally skewed to suit the networks, but still for the amount they’re shelling out they’re surely entitled to a stake in what goes on.

Besides...it’s not as though the format is new to the world of sport.  The NFL have had it for decades.  With playoffs, any advantage gained from your regular season schedule can be “found out”, so for me it’s better to have the ability to expand as well as the geographical segregation.

Of course I’m not suggesting that there’s nothing to nit-pick in this format, mind you.  Fifteen games?  Why not sixteen?  From a revenue standpoint I’d be annoyed having only seven home matches to promote while the others had eight.  I also understand there’s much debate over whether South Africa can sustain six franchises.

But overall, I say that if we rugby lovers can appreciate the complexities sport itself with its ever-ambiguous and ever-tweaking Laws, we can also wrap our noggins around what should be a very interesting Super Rugby 2016 campaign.  Best wishes to them all, in particular Los Jaguares and wonderfully-named Sunwolves.  JLP

In the group stages, there will be 17 rounds of matches, where each team will play 15 matches and have two rounds of byes for a total of 135 matches.

The winners of the Semi-Finals will progress to the Final, at the venue of the highest-seeded team.