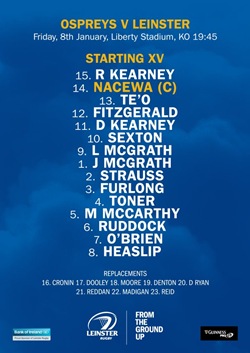 “You don't have those same issues in the southern hemisphere because they've thought out their international windows.”

A very, very interesting interview by Ospreys CEO Andrew Hore (not the former All Black hooker btw) over on WalesOnline ahead of tonight’s match at the Liberty Stadium.  Well it’s interesting to me, anyway.

Basically he is bemoaning the fact that his club have to give up so many players for what should be considered big matches like this one in the Pro12.

Since this is a Leinster fan site, I could be cynical and rip his argument to shreds.  I could say that resting players never did us any harm in the Celtic League as we have won four titles.  I could even say it hasn’t done the Ospreys any harm either as they have also won four titles.

Then I could say that the timing of the article is questionable as it seems to be there to provide an “excuse” should the Welsh region lose tonight, and the bookies actually have Leinster by two points.

I could say all of the above.  Well, actually I kind of did.  But none of it is my first response to the article.  It can’t be, because for the most part I wholeheartedly agree with him.

My apologies – I know this is a preview but regular readers will know I’ve been harping on the need for a change in the European rugby calendar since I started the site so I can’t ignore it when I see someone actually involved in the game agrees, even if he is possibly coming at it from a different angle.

But there is a connection to tonight’s match, because for a competition that spans four nations this is arguably the biggest cross-border rivalry that has grown organically over the years, and it’s a shame that it has the Six Nations looming over it.

While it will of course be interesting to see the Dan Biggar v Johnny Sexton matchup especially as the Welsh are Ireland’s first opponents in a few weeks, I’d also like to see the likes of Alun Wyn Jones and Justin Tipuric have more than bench roles, particularly against what is one of the strongest starting XVs we’ve sent over there in this league.

As well and all as Eoin Reddan played on New Year’s Day I’m glad to see Luke McGrath has recovered to start tonight as it’s important that he clocks up some game time with Sexton before he joins the Irish camp.

Of the other youngsters who have impressed, I see many are wondering about the fact that the names Ringrose, van der Flier and Molony are absent from the squad…personally I would reserve judgement on this until I see the lineups for our final two European matches…if they are all to feature then I’d call this good squad management.

But back to tonight, I have a gut feeling that the Welsh are going to finish on top.  The formbook says otherwise, the league table says otherwsie, the strength of the two squads says otherwise and as I have already said, the bookies say otherwise.  So why doesn’t my gut?

I think I’m being pragmatic rather than pessimistic.  The chances of Leinster winning the all of the remaining regular season matches are remote.  So far, we have lost twice – away to Edinburgh and away to Scarlets.  Both defeats sparked a lot of moaning at the time but now, given how the league looks, they don’t seem so bad after all.

Perhaps my gut is telling me that if our current six-game league winning streak is “due” to come to an end, this wouldn’t be a bad time for it to happen.  Don’t get me wrong – I hate losing to Those Pesky Birds but this is my (albeit very, very shaky though such is the way of the gut) reasoning.

So I’m predicting a  two-point home win tonight, with a lot of tackles, a lot of controversy, and not a whole lot of tries.

As always, I’ll be delighted to be proven wrong, for the obvious reasons of course, but also because it won’t help Mr Hore’s calls for a calendar change ;-) JLP

PS – I know I don’t say this often enough with these previews, though hopefully it goes without saying…best of luck to the other three Irish provinces this weekend; Ulster & Munster with their rearranged Euro ties and Connacht with their tricky visit to Llanelli.