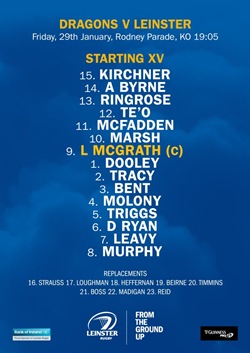 With its official launch during the week the Six Nations is creeping into the rugby world’s psyche more with each passing day but I’ll leave all harpin on that until Round 13 of the Guinness Pro12 has been and gone.

And it’s a lucky round 13 for fans of the provinces, with all four having their matches featured live on TV.  Zebre v Munster is on TG4 from 2pm tomorrow while Sky’s feature match is rightly the 4th v 1st clash of Connacht and Scarlets from 3pm while Ulster host Treviso from 5pm on both BBC2NI and TG4. (Check this link for our regular Thursday post showing all upcoming rugby on d’telly)

But first up is Leinster’s visit to the Dragons tonight, so let’s crack on.

Michael Cheika during his RDS tenure began a tradition of sorts surrounding this visit to Newport, which always seemed to fall the week before Heineken Cup matches - for example in 2009 it preceded the final while in 2010 it was before a back-to-back series with the Scarlets.  The tradition involved sending over a young inexperienced team with the understanding that defeat wasn’t the worst outcome.  And guess what, in both 2009 AND 2010 the outcome was in fact defeat.

So in some ways, this 2016 Leinster lineup which is bound for Rodney Parade very much resembles those of yore, but as far as I’m concerned there is an important distinction.  Maybe defeat wouldn’t be an absolute disaster for us given our strong position on the Pro12 table, but defeat resulting from a poor performance certainly wouldn’t augur too well for the upcoming series of fixtures during the Six Nations.

But don’t let that scare you...I’m confident tonight’s “Cullen’s Cubs 2.0” lineup can show us they’re ready for the step up from the British & Irish Cup side.

They have certainly been getting the job done in that competition with a perfect 6 wins out of 6 - ok, maybe it was against sides in the lower half of the RFU Championship but having seen at least the home matches, none of them exactly saw the visitors surrendering...the victories had to be worked for.

With Isa out injured and Heaslip, Sexton and Ruddock occupied elsewhere, Leo Cullen has taken a very brave step in nominating young Luke McGrath as skipper tonight, a tremendous honour for him.

He has led out the A side on occasion and no doubt he will “wear the armband” with pride.  For me this is an indication that he is very much part of the long-term plans of the province...there were rumours an import might be signed for the 9 position with Reddan & Boss not getting any younger (assuming we’re allowed what with Pienaar at Ulster) but this suggests otherwise, and he certainly has the talent to make the jersey his own.

Outside him at 10 is Cathal Marsh.  I went against the youngster pretty heavily in my writeup of the Wasps game and some appear to have misunderstood.  While replacements always have to be ready to come on at any stage of the game, it was unfortunate for him to have to bear the brunt of our attacking gameplan at such an early stage against such a well-coached and determined opposition.

In this case, he has gone the whole week knowing he is to start and I am very glad to see him getting more time in the role as he certainly has the talent to do well.  And this time around, he seems to have a better set up around him.  The Te’o/Ringrose centre axis is exactly what I wanted there and Kirchner, McFadden and another promising youngster Adam Byrne give him several back three options as well.

Up front it is great to see the name of Hayden Triggs back in the lineup; his return is most certainly timely.  He strikes me as someone who will be well up for a scrap and we all know the Dragons crowd can be particularly raucous so we’ll need players who can feed off of that kind of atmosphere.

And it’s not as though the youngsters in the Leinster squad are unfamiliar with rowdy Welsh fans.  In our squad for tonight Adam Byrne, Marsh, McGrath, Dooley, Tracy, Molony, Leavy, Loughman and Timmins were there for the A side’s trickier matches in recent seasons, like at Pontypridd or at Carmarthen Quins.

What of the Dragons?  Well I remember a time when Tiger Woods was in his golfing heyday and the bookies would offer odds for major tournaments “with or without Tiger”.  A similar approach could be made to Newport when analysing matches - “with or without Toby”, though despite being without him on this occasion, the spread is calling for a 5-point Leinster defeat.

Oh yeah?  Well that’s exactly what they predicted when we put out a young side against Bath and look how that turned out!

I may be looking more for a performance (particularly on D) than a result tonight and a losing bonus point wouldn't be a tragedy once the lads play well together, but for my prediction I’m going to say we’ll sneak it by 1-3 points, with the BBC Wales commentary team no doubt seething with anger over a refereeing call that will probably involve Ben Te’o.

Just a suggestion...why not get on social media and give the boys in blue your full support ahead of tonight’s match.  There’s a Pro12 title to be won, you know, and we’re well in the hunt.  JLP