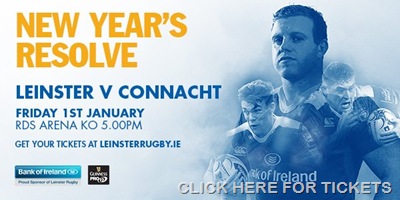 “Ten point win for Leinster” sounds like the kind of upbeat blue-goggled prediction I’d make myself  for a match like this, but it’s actually what the bookies are going for and I feel like it’s my duty to dial it back a notch or two.

Don’t get me wrong...Leo Cullen’s men are definitely well on the way back up after the crash landing that was the visit of Wasps back in November.  Even the subsequent performances in Europe can be counted as examples of recovery, but when you look at our overall Pro12 record in isolation, 7 wins out of 9, best defence and best points differential certainly doesn’t speak of a club in crisis.

And this is definitely a strong lineup we’re putting out to kick off the new calendar year.  Despite the irony of Ian Madigan wearing 22 after all I said about him earlier in the week, today’s half back pairing of Luke McGrath and Johnny Sexton has a look of Leinster’s long term future about it so it will be interesting to see how they work together.

Then there’s another player set to leave the province at the end of the season, Ben Te’o, slated to play inside centre.  Many felt this was where he should have always played for us, but personally I feel it was right to have him at 13, given I never really believed he was going to stay beyond this contract and his legacy at the province could well be that he bridged the gap between the eras of O’Driscoll and Ringrose.

In the pack, I am liking this front row.  I’d go as far to say as this should be our European 1-2-3 combo in January.  I have nothing against Messrs Healy, Cronin & Ross; I just feel these starters are the form players at the moment and even though none of the more “recognised” trio are on the bench we are still well covered at 16-18.

Great and all as it is to see Mike McCarthy back, I wonder if it would have been any harm to hand Ross Molony a start as reward for a top notch cameo at Thomond Park.  That said, his place on the bench gives us an awesome array of “finishers” as Michael Cheika calls them, though I reckon we could well need them.

The ten-point spread not only comes from Leinster’s recent form but also the fact that Pat Lam’s men have lost 3 out of their last 4 in all competitions in the midst of an injury crisis that has seen them struggle to put 23 fit bodies together for matchday.

But when I say we have to look beyond those stats and medical reports, it isn’t merely to do with the fact that they too pulled off an impressive victory at Thomond Park not too long ago.  I’m basing my judgement on a visit to Donnybrook back in November by the Connacht “A” side, known as the Eagles, when they blew away their Leinster counterparts 43-24.

Only a handful of the players who featured that evening are involved today, but my point is not about the personnel, rather the attitude.  Right from the kickoff it was clear that Connacht hadn’t travelled across the country for a mere run out.  They were awesome as a team and it was evident that there is a prevailing culture of confidence throughout the squad - and if they bring even a fraction of that with them to the RDS today, we’re in for a post-Christmas cracker.

Another thing they could well have taken with them is the infamous Galway matchday weather.  Wet and windy is what the forecasters appear to be saying, meaning anyone who is hoping for champagne rugby might find the cork is left firmly in the bottle.

I’m still going to plump for a Leinster win this evening, but only by 1-3 points, and we’re going to need all 23 men and all 80 minutes at full tilt to get it.  Here’s hoping that will be more than enough to persuade what promises to be a bumper New Year’s Day crowd to keep coming throughout the year.  See you there!  JLP