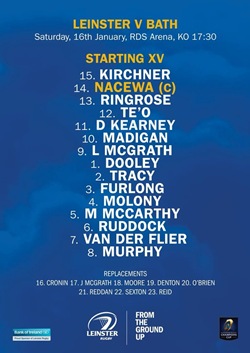 Before I harp on today's match, I’d first like to go back to the previous meeting between these two sides back in November.  “Must we?” I hear you cry.  Yes, I feel we must.

It was very, very difficult to analyse that match in isolation, coming as it did just six days after the Wasps thrashing that will always define our 2015/16 Champions Cup campaign.  But if you can somehow bring yourself to take that display out of the equation, I contend we were very unlucky to lose to Mike Ford’s men that day.

“But our scrum got mulch-ified!” I hear you cry.  Yes it did, but then again Bath had a freakish 12 put-ins from the 15 scrums on the day.  With even half of that number, that 3-point advantage at the end evaporates.  We were far from perfect it’s true, but unlike the week before we did not have ourselves entirely to blame.

Which brings me to this encounter.  Much has changed on the European landscape since that day at the Rec.  Toulon have moved back into serious contention in the pool on the strength of victories over the two sides.

Meanwhile domestically, Leinster have moved to within a game in hand of first place as Bath find themselves outside the top six.  Though to be fair to the Premiership outfit, their league table is a curious sight at the moment with two-thirds of the clubs having lost more matches than they have won.

Does either team have much to play for?  Well Bath certainly do.  They made the last eight last season despite two defeats so the two they have on their ledger now certainly won’t scare them.  They may play Toulon next week but it is at the Rec which means victory in Dublin will put them right back in it.

What of Leinster?  Is this, as the constantly-bandied-about phrase suggests, a “dead rubber”?  Eh, no.

Not sure about you but I want that duck-egg in the Pool 5 win column gone against our name.  And that should really be motivation enough.

So I suppose the question is...have we selected a side that can do this?  To which my answer is...absolutely.

Yes, this is very much an “experimental” lineup, but there isn’t a single name on that list that hasn’t impressed at some stage for the senior team this season.

I was confident we’d go with some younger names alright, but I thought they’d be limited to Ringrose, van der Flier and Molony with at least one likely to be on the bench.  But this is easily the most “Cullen’s Cubs” lineup of the season with a starting front row of Dooley, Tracy and Furlong which is bound to have the Sky commentary team relying heavily on Shaggy for info.

This is definitely a big challenge for them.  In fact, the bookies’ spread went from “scratch” (ie too close to call) before the team announcement to “Bath by 5” after it.

In order to find a path to a Leinster triumph, we must put our faith not only in the young players, but also the experienced players around them.  Madigan pulling the strings.  Mike McCarthy trying to stake another strong claim for the vacant test 5 jumper.  Not to mention the almost ridiculously-strong bench.

We must also put faith in the coaching staff.  Week after week I harp on our defence...this could well be the sternest test for the systems Kurt McQuilkin has put in place since his arrival.

If we can maintain our consistency without the ball, and I suspect we will, then I see no reason why we shouldn’t overturn the bookies’ pessimism and actually win by 5 points ourselves, so that is what I’m going for.

Hopefully I will see you there...we’ll need to wrap up but otherwise the weather promises to be reasonably clement so it should be a great RDS occasion whatever the stakes.

And let us not forget the “A” team, who’s British & Irish Cup campaign is the polar opposite of their senior counterparts.  Four wins out of four has us on the verge of yet another quarterfinal slot, though today’s trip to Moseley could be the trickiest of the pool.  Keep an eye on the #COTAT hashtag from 3pm to see how they’re getting on and also use it yourself to show your support.

Plus we can’t ignore the other provinces...Munster are well capable are putting last week’s disappointment behind them while Ulster and Connacht have knockout qualification on their minds...best wishes to all.  JLP