Isa out for 2-3 weeks and other Leinster injury updates 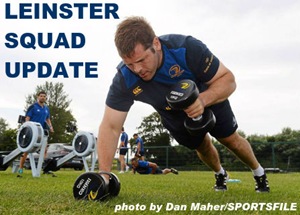 Ahead of this Friday's game away to Dragons in the Guinness PRO12 (Rodney Parade, KO 7.05pm), Leinster head coach Leo Cullen has provided the following injury update:

Marty Moore: picked up a hamstring injury at the weekend and will be out for six to eight weeks.

Isa Nacewa: had a minor issue with his knee, underwent a surgical procedure last week and will be out for two to three weeks.

Royce Burke-Flynn: had a procedure done on his neck last week and will be out for four months.

Mike Ross, Cian Healy, Collie O'Shea: rehabbing their injuries for the last number of weeks and are still a couple of weeks away.

Tom Denton: was due to be involved in the Wasps game but picked up an injury in training last Thursday and is a week or two away from returning.

Hayden Triggs: is close to making a return to action after undergoing ankle surgery in December.

Mick Kearney and Jack Conan: both are three to four weeks away from making a return.