Dorce Outside - 5 Years On

I know full well that doing anything that resembles throwing bouquets at yourself can be frowned upon, so in many ways this post is something of a risk.  But then again when you run a website for a while you can’t help but notice certain milestones as they go by, and today happens to be one, so we’re going to commemorate it here at Harpin Manor.

While out on a “brisk” walk to try to burn off the Christmas excesses one year I had the song “Horse Outside” by Rubberbandits playing on my headphones.  I’m not sure exactly at what stage the “Darce to Dorce to Horse” penny dropped in my head but once it did there was no stopping me;  because after blogging, rewriting song lyrics “Weird Al Jankovic” style is something of a hobby, and I had already gotten a modest amount of attention (in the Irish blog community anyway) for putting Irish history words to Billy Joel’s “We Didn’t Start The Fire”.

Anyway...long story short, I wrote Dorce Outside and published it on this day exactly 5 years ago, and as I did, I honestly did not expect any positive feedback whatsoever.  I was even reluctant to plug it on twitter, with the only reaction I anticipated being a disparaging tweet or two by particularly grumpy Munster fans.

A little ditty to sing on the buses down to Thomond in April : http://bit.ly/dEUvhs #Leinster #rugby

It’d be a stretch to say it went “viral”, but it was shared extensively around the Irish corner of the internet in places like boards.ie, Leinster fan forum Babbling Brook and even Munsterfans, with one or two elsewhere actually trying to claim it as their own work.  I heard a couple of reports that a print out was actually passed around the Leinster dressing room, with Sexton and D’Arcy among the recipients.

A radio station contacted me with a view to recording it, and apparently a section of fans tried to get a chant going at the next match at the RDS, but the consensus ended up being that it was best presented merely in written form and left at that.

The “buzz” surrounding it, if that’s what you can call it, kept going for a couple of weeks until it was featured in the Irish Times’ “Hold The Back Page” slot compiled by Philip Reid.

Anyway...here’s the article, and I promise I won’t harp on this any more before the ten-year anniversary ;-) JLP 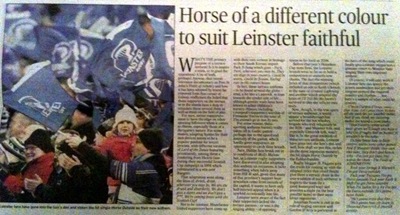 Horse of a different colour to suit Leinster faithful

WHAT’S THE primary purpose of a terrace anthem? Is it to inspire a team, or to goad the opposition? A bit of both, perhaps? Anyway, that recent television documentary on Pete St John’s Fields of Athenry and how it has been adopted by teams far removed from that corner of Galway reaffirmed the belief that those supporters on the terrace or in the stands have a duty to stimulate those around them as well as those on the field of play.

For sure, soccer supporters seem to have the edge on other sporting followers when it comes to chants, especially those of a derogatory nature. For some reason, adapting hymns for their own devices seems to be a popular pastime for soccer lyricists, with different versions of Lord of the Dance featuring prominently, among them a rendering from Hearts fans during their successful Scottish Cup campaign in 1998 which culminated in a win over Rangers.

That adaptation went along the lines of, Drink, drink, wherever you may be, We are the drunk and disorderly, We don’t give a damn and we don’t give a f***, We’re coming home with the Scottish Cup!

Not to be outdone, Manchester United supporters have come up with their own version in homage to their South Korean import Park Ji-Sung which goes – Park, Park, wherever you may be, They eat dogs in your country, Could be worse, Could be Scouse, Eating rats in the council house.

In fact, these terrace anthems – to be found around the globe – tend, a bit like a Limerick, to lean towards the cruder side of life . . . although gentler souls have been known to adapt children’s nursery rhymes, including Liverpool’s supporters worship of Fernando Torres to the tune of The animals go in two by two.

For some reason, these sporting anthems haven’t really taken off in Gaelic games – perhaps due to the speed and intensity of the games, which hardly gives supporters an opportunity to catch their breath.

Sure, Dublin fans break out in to renditions of Molly Malone but, as Leinster rugby supporters have discovered in also adopting that anthem on occasions, it lacks something when taken away from Hill 16 and, given that many of that province’s support base nowadays come from outside of the capital, it seems to have only half-hearted appeal when it is sparked occasionally into life.

Leinster were aware of the fact their supporters lacked the terrace passion – or was it the singing ability – of opposing teams as far back as 2006.

Before that year’s Heineken Cup semi-final, the Leinster branch went so far as to hold a competition to unearth new chants. The fact the winning lyrics of that competition (which included an ode to Keith Gleeson to the tune of Greased Lightning and another which adapted the lyrics of I’ll Tell Me Ma haven’t survived to this day tells its own story.

Now, though, in the true spirit of terrace anthems, it would appear a breakthrough has arrived for the hot whiskey brigade who trek religiously to the RDS – and Munster folk, and especially Limerick folk, won’t like it. In the great tradition of these terrace anthems, Leinster have gone into the lion’s den and, well, how shall we put this, stolen (in the most ingenious manner) the hit single Horse Outside by the Rubberbandits.

Rugby blogger JL Pagano gets the credit for coming up with the adapted lyrics that could finally give them a terrace chant in the true tradition of such anthems: it inspires the team (in a good-humoured way) and provides a slight (in the best possible taste) to their most bitter opponents.

Jonathan Sexton is cast in the role of singing narrator and Gordon D’Arcy is portrayed as the hero of the song which could finally give Leinster supporters a genuine retort to Munster fans singing their own imported anthem.

Of course, it will only work if Leinster fans can ignore the prawn sandwiches and get their tongues around the required tonality and rhythm . . . but here’s a sample of what could be in store.

C’mon Gordon D’Arcy, cross that loine. Let’s play those fockers off the pork for yet another toime. And if you think my taunting makes me sound a cruel bloke

“Don’t worry; when we all wear green we’ll laugh and have a joke Cos if rugby had no banter, it wouldn’t be the same

Its fans know how to keep control unlike some other games! And if Munster thinks they own this tune, they don’t and here is why – I’ve just got these four words for them – The Fields of ATHENRY???!!!