Note the late team change…Isa Nacewa starts at 15 instead of Rob Kearney who felt a “tightness” in the Captain’s Run. Jamie Heaslip is still captain tonight. 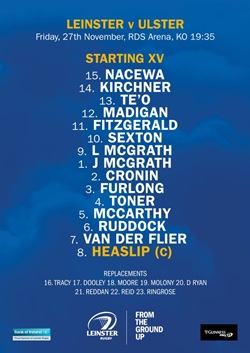 The “Home Nations” are dealing with the aftermath of the World Cup in different ways.

Over in England the press have played their part in airbrushing out the disappointment by highlighting everything that’s going to be different about the Eddie Jones era (even if he still won’t pick foreign-based players) and of course a few good performances in Europe by Premiership clubs also helps ease the pain.

In Wales they also have some major transition, with Martyn Phillips taking over from the much-maligned Roger Lewis at the WRU and the Millennium Stadium getting “Aviva’d” in that we must now call it the Principality Stadium.  Oh, and there has also been small matters like Gatland’s Law and a doping scandal to process.

The Scots seem to have things good these days all things considered.  Reigning Pro 12 champs and came the closest to the final four of the World Cup, so there doesn’t appear to be too much broken that needs fixing, but we’ll know more about that when the next Six Nations comes around.

Which leaves us here in Ireland, where the words “World Cup hangover” seem to be used most often.  Only Connacht are really making any waves on the Provincial front, topping the Pro12 as they do as well as going 2 for 2 in their opening European matches.

This weekend gives Irish rugby the opportunity to retreat into its own bubble, if only for the length of a couple of matches, and maybe have a look at what can be done going forward.  And the two sides who disappointed most in their European openers meet at the RDS tonight - as if Leinster and Ulster don’t already have enough history to make their clashes interesting!

I think if you could somehow come up with a computer algorithm that takes all of the complaints over Leo Cullen’s selection policy since the start of the season and then spits out a matchday 23 that most closely resembles what the fans have actually wanted all along, it wouldn’t be too far off the team that’s due to take to the field this evening.

Although I said in my Bath writeup that I didn’t want any more tinkering done with our centre pairing, I am prepared to make an exception with Ian Madigan being handed the 12 jumper.  Maybe his omission of late has something to do with his contract negotiations, maybe it doesn’t - but as long as he’s at Leinster, if Sexton is at 10, Mad-dog should be 12 for me, no two ways about it.  Yes, Luke can work there; yes, Noel Reid can work there, but Ian has to go first.

The Sexton wraparound is effective and so is the Madigan “howitzer” miss pass.  But together the possibilities are seemingly endless and with Ben Te’o as strike option and a back three with tons of test caps (update : Isa starts for Rob K…not quite as many test caps but we all know why that is!) there is plenty to suggest this is a combination that can work both with and without the ball.

BUT...we go back to the “World Cup hangover”.  Is that a thing?  I do think the transition from one situation to another does play a part, especially given the stark contrast in experience between Joe Schmidt’s set-up and Leo Cullen’s.  That, however, does not count as an “excuse” for the more seasoned players in the Leinster squad.

Then we have the need to bring up the promising young players.  Some have called for a more widespread “Dave O’Leary at Leeds United” type mass introduction of youth and while I can appreciate this desire on the back of recent performances, maybe something a little more subtle is required, and in tonight’s selection we seem to have just the right smattering of upcoming talent - Luke McGrath at 9, Josh van der Flier at 7 and Garry Ringrose on the bench to name but three.

Last but certainly not least the Leinster scrum will of course be heavily under scrutiny tonight.  Though if the 2013 Pro12 final is anything to go by, should Ulster try the kind of antics that they did that day, ie not far off what Bath were doing on Saturday, then John Lacey’s reactions should be much less favourable than those of Jerome Garces.

On Ulster’s side of the equation, while I haven’t been able to follow their season too closely thus far, they seem to have players in situations very similar to ours...World Cup stars like Best and Henderson, those who didn’t quite make it like Trimble and Tuohy, and promising youngsters like McCloskey and Nelson, all eager to impress.

So taking everything into account it makes for an intriguing contest, and I for one can’t wait.  The bookies have a home win by 5.  I’m feeling a little more confident than I probably should and I’m going to say we’ll finish on top by 7-9.  But if we’re to get a result like that we’ll need a serious amount of accuracy and leadership, two things which have been lacking of late.

Hope to see you down at the RDS tonight to find out what happens!  JLP