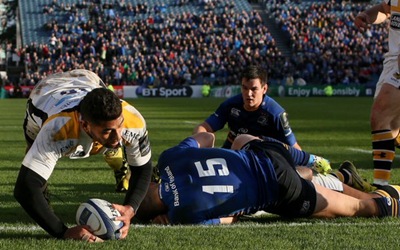 A MONTH OF SUNDAYS

It’s like someone sat down and scripted a series of events specifically designed to get my goat.

What say we first deny his rugby team a rake of their best players, have the ones able to play perform below par, and finally make him watch it all fall apart from 1pm on a Sunday.  Then, a few weeks later, we’ll make him go through the whole thing again, only this time with Leinster!

It was a long, long 80 minutes in Ballsbridge yesterday, and watching it a second time later that evening seemed even longer.

First and foremost, credit where it’s due - Wasps were worthy winners and the better team on the day.  But those who didn’t watch could be forgiven for thinking that the scoreline came from total dominance by the visitors.  Not the case at all.

Here’s what I said of the Premiership outfit in my preview :

From what I have seen of Wasps so far this season, while they have many attacking options not least of which is Christian Wade (he certainly knows how to find the try line against us), their success with the ball seems to stem mainly from having opportunities presented to them.  When it comes to creating them, not so much.

I think it’s pretty safe to say they had an opportunity or two presented to them at the RDS!

A few weeks ago Leinster recorded a 27-3 victory in Treviso and while I was happy with the bonus point victory away from home, I couldn’t harp on it without pointing out the result came more from the home side’s mistakes than from our good form.  Yes, we took our chances when they were given to us, but still, they WERE given to us.

Well the tables were definitely turned on us this time around.  You’d have a hard time convincing me that if you could somehow remove the unforced Leinster errors from the performance, the winner would definitely be the same.

And the mad thing is that the shambles didn’t really start until the 28th minute.  Even though we were 6-9 down on the scoreboard at that point, there was plenty of evidence that we could come out on top.  We were the ones putting more pressure on the visitors and while their D was holding up well, we had enough talent on the pitch to break it down eventually, or so we (and most watching whatever their allegiance) would have thought.

Plus, our own defence was having good success - even if a first up tackle was missed the cover was able to take up the slack.  I feel it’s important to point out that Dave Kearney was involved in a lot of it and was arguably our best player for that opening spell.  Played his part in a choke tackle, made a superb try-saving stop on Halai and pulled off the type of catch on the run that you’d expect from his family.

But when he placed the ball after being tackled and Sean O’Brien knocked on in his attempt to pick and go, that’s where it all started to go south.  And that first Wasps try was symbolic of how the final three quarters transpired.

When Joe Simpson put up his box kick shortly after the scrum, his intention wasn’t to set up a try.  I mean - every team wants to score a try all the time of course, but you take your opposition into account and aim to just “put the ball in the right area”, which he did, and hope your team mates will follow it up, which Christian Wade did.

Yes, the ball took one bad bounce.  And yes, the ball then took another bad bounce.  And yes, Dave Kearney was unfortunate to slip.  But I dare say any coach will tell you that he would be expected to deal with the overall situation, and he didn’t.   There was Wade, he took it, dotted it down, try Wasps, simple as, Christmas come early.  Credit to him and Simpson for their part, but without the error there’s never a try from that play.

And when it’s your day, it’s definitely your day.  A few moments later it was Wade’s turn to be, er, turned and he himself made an error taking it over his own line giving Leinster a 5m scrum.

From there we tried to get over the line but in the 10 minute spell before half time I thought maybe the ref missed a few Wasps no-nos - deliberate knockon in front of the posts, a push in the back by Daly on Madigan, hands in the ruck by Sam Jones.

But it wasn’t to be and don’t worry - it’s not my intention to put the ref on the hook for this result.  In the second half he pings Nathan Hughes for not releasing after the tackle.  I thought this was harsh, but if M Raynal saw it as a pen then the fact it stopped front foot ball, on top of all the other pens up to that point. should have made a card at least an option.

In fairness though, I’d be a lot more concerned about what Johnny Sexton did with the resulting penalty, trying and failing to get every possible inch out of the touch-finding kick.  From what should have been an attacking lineout in their 22 we soon had Wasps running at our defence in our own half.  A gut-wrenching turnaround and possibly the most pivotal one.  It didn’t help that it came shortly after he put the restart from the Simpson try straight into touch.

Oh yeah, that second Wasps try, I almost forgot (or was I trying to forget?).  Definitely the nearest to a “created” five-pointer of the three, though Jack McGrath’s attempt at a tackle won’t be viewed favourably up at Belfield today.  Still, a good break, a good offload and a good finish.  But even that shouldn’t have been enough to earn the four pool points on the day.

The unforced errors just went on and on...a kick out on the full here, a pass gone to ground there, wingers getting dragged into touch, free kicks and penalties from scrums in the second half; nothing was going right for us with the ball and only a fraction of that can be put down to the visitors.

Of course the biggest facepalm moment was still to come...Elliott Daly can kick three pointers from humongous distances of that there is no doubt, but given his side’s comfortable lead, he probably wasn’t altogether pushed over what happened to his attempt on 68 minutes.  At least not until it fell short and proved even more difficult than the Wade incident for Dave Kearney to deal with and to compound his knock on, Jack Conan picks it up from an offside position to hand Daly a far easier kick.

Finally to add insult to all the other insults, we had a lineout with the clock at 79 minutes which we proceeded to throw away (not for the first time on the day either) for Wasps to add a third in the corner, albeit with another fortunate bounce.  It was fitting that Piutau got the score as he was the visitor’s most adventurous player on the day and it earned him man of the match award.

Hopefully I have been critical enough of Leinster players up to this point to earn the right to bring injuries into the equation.  Even just two from Nacewa, Te’o, Fitzgerald and Rob Kearney would have been a major boost to any backline, while in the forwards, we not only lost Strauss, O’Brien and McCarthy but each were hurt in the act of producing some of the rare positive moments for us.

But even without those players, we’d expect more from those available and there’s no sugar-coating it.  Questions have to be asked about the strategy, about the in-game management, and for me, most of all, about leadership.  We looked like a something close to a cohesive 15-man unit in the opening stages of the contest, but once it was lost we just couldn’t get it back.

And our schedule is not at all forgiving - just six days to prepare for what is always a tough challenge in visiting The Rec.  Still, we are not in a position to worry about what is happening elsewhere - we have to exorcise these demons quickly and at least put in a performance the Leinster faithful are more used to.

My biggest concern is our centre pairing which through a combination of the World Cup and injuries has become an almighty conundrum.  For me it’s the constant chopping and changing that has hurt us the most, but even if the same personnel are unavailable next week I wouldn’t go with Reid and McFadden again.   Garry Ringrose had a brief cameo towards the end of this match but even in a couple of contributions showed what he can do - I say start him next week, possibly with Madigan at 12.

Does this imply I think we’re “toast” in this stinker of a pool?  No.  This was a match where we needed the four points, of that there is no doubt.  And when we face Wasps again in January, if we are still in with even a mathematical shout of the final eight that will be some achievement.

But whatever about coaching and selections, this is a group of Leinster players who know full well they are capable of producing a standard way above what we saw yesterday.  It’s up to them to take the criticism on the chin, knuckle down and fix what needs fixing.

I certainly don’t want to go through another month of Sundays like that again!

Come on you boys in blue.  JLP