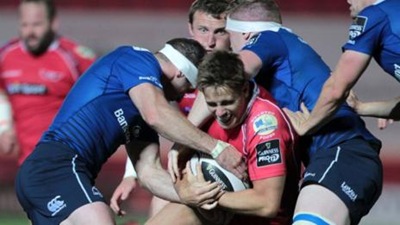 OK I have a confession to make.  When I watched this match live, maybe I wasn’t paying attention as fully as I might have done.

You’ll no doubt appreciate that’s a pretty scandalous admission from someone who purports to run a “fan site” for his team.  But there you go.  I’ll be expecting the paparazzi outside my door within an hour of this going up on the site.

In my defence I offer the very shaky evidence that there’s another major rugby tournament offering a major distraction to me this weather.  One that is responsible for the work to be done on this site increasing exponentially over the past couple of months.

And while all that is true, the fact of the matter remains that I had the time to sit and watch this match yet all I had to say at full time was the following :

Result nothing I didnt expect. Decent final quarter with LMcG/CM but surely Scarlets will feel they left try bonus behind? #SCAvLEI
— Harpin' On Rugby (@HarpinOnRugby) October 16, 2015

An examination of this tweet will show not only how distracted I was but it will also help me describe what actually happened in Llanelli on Friday.

First, on the “nothing I didn’t expect”.  Ahead of this fixture I wrote what has to be the gloomiest preview I have ever done for a Leinster match in all the years this site has existed.  I mean, I don’t ALWAYS predict a Leinster victory but a defeat by double-digits?  Never.

Still - I stand by what I said.  Scarlets on the up with a significant arrival to their squad from the World Cup, Leinster finding their way under a new coach and with two more departures TO the World Cup on top of all the others.  Tack home advantage on to that and you can’t see anything BUT a home win.

All of which means I would hardly be surprised by the fact that the Welsh region amassed a 25-0 lead in the first hour of the contest and looked to all intents and purposes like more was on the way.

But now we move on to the “Decent final quarter with LMcG/CM” part.  Full disclosure...what I meant by this was that the 25 points the Scarlets got came with Isaac Boss and Ross Byrne as our halfbacks while the 14 we got in reply were when they replaced by Luke McGrath and Cathal Marsh respectively.

I was embarrassed to learn on second watch that it was in fact the “Boss & Ross show” pulling the strings when we got our first try, easily the best on the night from either side.  Off the restart having gone 25-0 down after a Steve Shingler penalty, Ross Molony rose to bat down a well placed restart kick and we were on the front foot.

Now before I go on describing this try I’m going to pause and go back over the Boss & Ross display overall.  Because up to this point, it wasn’t great.  Now I’m not as “anti-Boss” as many Leinster fans are but I do admit that he doesn’t seem to be at his best of late, and this tacked on to this Byrne’s debut made our offence very stagnant for the first 20 minutes.

Actually on 2nd watch I got the impression that perhaps Byrne was under orders to keep his attack patterns simple for the opening quarter.  It was like he was a second scrum half, shipping the ball on every time he got it with little or no variation.  And on the rare occasions he did put boot to ball, the result seemed half-hearted.

But almost exactly the second the clock ticked past twenty, suddenly we seemed to start mixing things up with the odd pass inside and what-not.  And eventually this more positive approach seemed to get the side going enough to at least put some respectability in the score if not actually earn us some league points.

Anyway back to the try...Molony bats down the restart and we’re back on the attack.  For a few phases it looked like we were getting nowhere as the Scarlets were in our faces but all of a sudden we found ourselves with a 5-on-4 overlap out wide.  Enter Wexford man Tony Ryan, literally just on the field making his debut.

Talk about slotting in right away!  About three involvements in this series including an offload in the tackle which made the most of the overlap putting Noel Reid though before he shipped it on to Isa who seems to be scoring tries for fun these days.

OK so I’ve shown that it wasn’t all bad when the starting halfbacks were involved.  However,  there’s no denying Luke McGrath and Cathal Marsh are the preferred pairing for Leinster this weather and I’d be pretty confident that had they started this match we would have gotten something out of it.

So why didn’t they start?  Well my guess is the age old “big picture” we’re always reminded of whenever Leinster have played in the Celtic League over the years.  With (hopefully!) both Sexton and Madigan due to return to the lineup in November I may have gone as far as to criticise Leo Cullen & his staff had they not found an opportunity to start Ross Byrne during RWC, and of the five matches in the Sep/Oct period, this was probably the best one to do it.

Now to the final part of the tweet, and this is one I feel I can get behind.  Were the roles reversed and we built a 25-0 lead with three tries before not only failing to get a fourth but also letting two in down the other end, I know for a fact that the thrust of the commentary, including my own, would be critical.

Yet from what I have seen around the Welsh online press and social media, despite the Scarlets superior form and squad, this is being hailed as a mighty victory for the West Walian region.

Fair enough, two of their tries were well made after sustained pressure.  The play which led to the first was similar to the chance butchered by Furno for Italy against Ireland - play sweeping out to the wing in one direction before the overlap being exploited out the other way - only this time, James Davies was able to easily apply the finish.

And the third try was also after a spell of Scarlets possession at the start of the second half, and when a Noel Reid challenge had him put in the bin, they eventually made the most of the extra man by going over.

But what say we take a broader view of the home side’s display.  35% possession and 36% territory are not stats you want at home.  Sure they started brightly and deserved the first try but even with a pedestrian offense we grew our way back into it and literally handed them their second try.

Again this resembled a move from Ireland’s World Cup campaign and this one even had the same scorer in DTH Van Der Merwe who ran an interception all the way back for a score.  The one difference between this and his try for Canada was that the ball was thrown to him rather than kicked...in fact it could be argued that had Reid been aware of the winger’s position the grubber in behind was the far better option.

I’m assuming their bright start to the second half came from a dressing-room rollocking for not making more hay in the opening period but as I have already said, while our play did improve after the third try, it could also be said that the Scarlets also retreated into their shell and didn’t seem too pushed about the extra league point, something they haven’t managed in any of their four wins.

But hey...I’ll let the Welsh blogs delve into that more deeply.  Obviously I’d rather harp on Leinster and the halfbacks most certainly weren’t the only reason I’m seeing our glass as half full so far this season.

It would appear that Leo Cullen has found himself in a back row selection situation similar to that faced by Michael Cheika at the Wallabies.  OK - of course that’s a tad disingenuous, but hear me out - Dan Leavy and Josh van der Flier may have a long way to go before they reach the heights of Michael Hooper and David Pocock, but having both on the pitch this time around certainly did our D the world of good, and more often than not when a Scarlets attack broke down, one or both of them were involved.

Another thing I predicted in my preview was that referee Peter Fitzgibbon would somehow play a part.  Well, he did, but we certainly can’t tag him for the loss though the inconsistency I foresaw was clearly there.  He missed a few high tackles by the home side and while he did ping Tom Price for this one on Marsh, given it was borderline assault it could have been yellow.  That said, in the build up to their second Scarlets try as we were a man down he had several opportunities to put a second blue in the bin which he ignored.

Our problems in attack were caused in part by are early stagnation I have already mentioned, the fact that the Scarlets out-tackled us by 2 to 1, and towards the end a couple of try-scoring chances that went a-begging, most notably a drop by Fergus McFadden with the line at his mercy.  A losing bonus would have been a definite possibility had he finished that.  Eventually it took a well drilled lineout/maul (set pieces were ok generally by the way) move to get James Tracy over but it was too late to salvage anything more.

But the fact that I’m writing this on the morning of a massive day of hope for Irish rugby isn’t the only reason I’m being positive about this result.  You never want to see your side never really in a contest but for all the upheaval at the province there are reasons to be optimistic down the line.  And what’s more we’ll get an even better sense of where Cullen’s cubs are at when the league champions come to the RDS next Friday. JLP