What are Leinster to make of Ben Te'o? 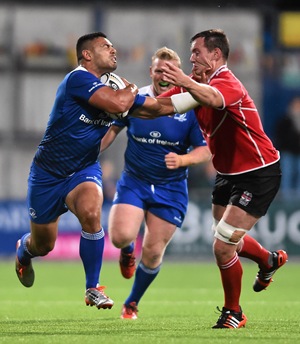 At one point in the midst of Leinster’s recent mauling of Moseley I chuckled to myself as Ben Te’o got the ball in open play and from where I was sitting it was clear there was nothing else on his mind but to seek out a would-be tackler and make him regret the decision, like you see in the lead photo there.

So then I got to thinking...is the way he plays the game part of “The Leinster Way” and just where will he fit in when it comes to Leinster’s scheme of things this season?

A few headings to consider...

Now to be fair to him, he played a significant role in the best try of the night at Donnybrook on Friday, and this involved taking a sweet long pass from Noel Reid and shipping it immediately out to Fergus McFadden for the finish - so it should be pointed out that he does know how to pass.

But it’s hard to deny that the direct route is the trademark part of his game and while it’s a style more suited to Matt O’Connor’s approach, it has its uses and amid the turmoil that surrounded Leinster last season he certainly got his name among the relatively few tries we WERE scoring.

I’d have loved to have been a fly on the wall around 20 years ago when the game went pro and the first meetings were taking place between the national rugby (ironically named in this case >>) unions and agents over the initial contracts.

When I think of how the blazers must have felt as they waited for their adversaries to arrive, I imagine that scene early in Star Wars IV - A New Hope when the rebel troops know their ship has been boarded by the Empire and the doors are about to be broken through…. 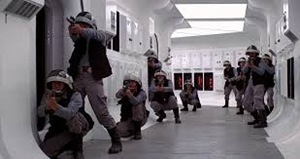 In reality, however, I guess it might be a tad disingenuous to suggest the agents are akin to Sith Lords.  They are simply trying to get the best deal for their clients and to do that they must be able to not only disassociate themselves from the prevailing winds surrounding the sport in question, but also to properly coach their players to do likewise.

And in rugby we have an added dimension, with two distinct codes and the best-known agents often ferrying (or at least threatening to ferry) players back and forth between them to improve the bottom line.

Te’o’s affairs are handled by one Isaac Moses, who has had, shall we say, a colourful career, and most likely the things we do know about are the tip of the iceberg...

“The brilliance of agent Moses is to suggest possibilities and instil in his client the courage to pursue them.” - Andrew Sutherland, The Roar, 2012

“Moses was banned from operating by the Agent Accreditation Scheme over his involvement in the Storm salary cap drama but the suspension seemed to have little or no impact on his operation” - SteveMascord.com, 2013

Now that Te’o is in the final year of his contract you can be sure the NRL clubs will be sniffing around to see if they can lure him home, if fact some are already trying…

“The Courier-Mail understands the Titans have given up hope of securing Te’o for next season unless he opts to rescind the final year of his two-year deal with Irish rugby club Leinster.” - Peter Badel, August 2015

The thing about those league clubs is that they won’t be too concerned about how he plays for Leinster this season...he was an integral part of the Rabbitohs’ 2014 Premiership title plus has made State of Origin appearances so his brand is well known down there.  That’s not to say, however, that Moses won’t want Te’o to exert himself this season at the RDS.

No discussion of the above item of sporting attire can be complete without making reference to one Eoin O’Malley, who was as near a natural replacement for BOD’s role at both Leinster and Ireland as we ever got to see before his career was so tragically cut short by injury.

While he’s not exactly flush with experience at the position himself, Te’o has still gotten more game time wearing that jumper of late than anyone else in our squad for the opening rounds of the Pro12 season.

Fergus McFadden has played there in a pinch and as the saying goes can “do a job”, Darcy as well but with him not making Irish squad and his not seeing out the season he could be used sparingly over the coming weeks.  We have talent coming through the ranks like Collie O’Shea and Garry Ringrose (who was an interesting selection by Leo on the bench for Leinster’s trip to Embra...more in our preview tomorrow).

But one thing is for sure…whatever about how Leo & his new coaching setup believes a 13 should play, Joe Schmidt most certainly has his own thoughts on the matter and I reckon Ben neither fits the mould nor could be made to.

As for moving him to 12 or “doing a Burgess” by giving him a go in the back row, meh…it could work given time but with it being the final year of his deal that’s something neither the province nor the player has.

Though the offers are bound to come in for the player throughout the season even if only behind the scenes, he will still be motivated to perform so I say give him every opportunity to do so.  If it doesn’t work out over the coming weeks, like I say above, there are alternatives and at Champions Cup time, we will hopefully also have Luke keen to play 13.

When Mr Moses comes a-knockin to see if we’re up for an improved contract, I’d be on for offering him one, but only if it came with a side order of “take it or leave it”.   I can’t see either party having anything to lose with that mindset.  JLP