We Thought It Fitting That The Headline For Our Review Of The Excellent Balls.ie Book Should At Least Be As Long As One On The Site 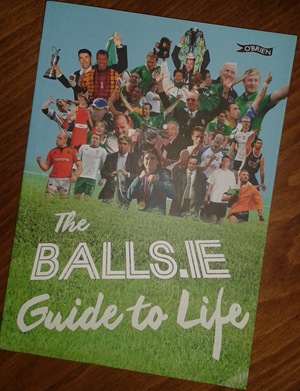 As you may have noticed, we kinda like our Leinster & Ireland rugby here at Harpin Manor.

What you may not know is that we’re not exactly opposed to following teams from other sports as well.

Naturally as we’re slap bang in the middle of the pool phase of a World Cup we don’t have a whole lot of time to take in much more sport, but let’s just say in recent times we were pleased when the Dubs won Sam, when Spurs beat City 4-1, and when the Golden State Warriors won the NBA title.  However, the Oakland Athletics being in last place in the American League West plus the San Francisco 49ers losing to Arizona by more than Romania did to Ireland haven’t pleased us quite as much.

Of course we do appreciate other sites which do follow all sports, and as you’ll see by their frequent links in our daily “Front Five” posts, Balls.ie is frequently a source for us especially when we’re looking for a chuckle at one of sport’s funnier moments.  And when asked to review their new book “The Balls.ie Guide To Life”, we were more than happy to oblige.

If I write that this is essentially a load of their posts put in book form, that may sound as though it’s a bad thing.  But if I TOLD you that fact I’d be sure to put it in an extremely enthusiastic voice like I was giving a TED talk, because it is in fact a very, VERY good thing.

It’s not one for reading cover to cover - it’s one for flicking through and landing on a random page at any given time. You leave this book lying around when you have company over and I absolutely guarantee you it will impress your visitors - just make sure their hands are clean as they are bound to pick it up uninvited and start skimming through (I’m speaking from personal experience here - can you tell?) 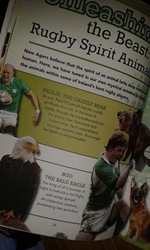 There are plenty of egg-chasing references to enjoy, such as this chapter titled “Unleashing the Beast - Rugby Spirit Animals” where as well as POC & BOD we see what wildlife the lads liken ROG, Henderson, Toner, Hickie to among others.  (Let’s just say you can probably work out what they went with for John Hayes…)

But like I said, it’s a book for Irish sport in general, and you certainly don’t need to be an expert in soccer, GAA or other codes to appreciate the humour.

I particularly like the feature “Find yourself : 15 Irish Sports Fan Stereotypes”, which includes this one, “The Wannabe Yank” - it reminds of a Super Bowl party I was at years ago when I went to the bar and ordered a Budweiser (don’t usually drink it but they were half price in a promo that night) when the barman asked me to repeat my order.  When I did, he says to me “I didn’t hear you the first time with your phony American accent!” before being rather humbled by learning I was actually born in California.  Still, I do appreciate where he was coming from, as the stereotype definitely does exist. 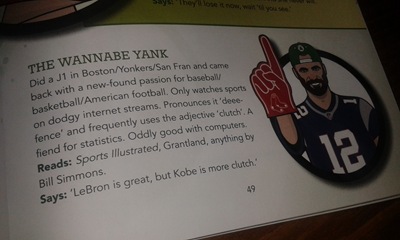 So suffice it to say we heartily endorse this product :-)

While we’re on the subject of books, our debut publication “The Laighean, the Pitch and the Website : The Chronicles Of Harpia” is still in the works, keep an eye out for it in a bookshop near you!

Er….actually I was only joking about the Harpin book, but hopefully you believed it was possible at least for a moment! ;-)  JLP

CLICK HERE TO ORDER YOURSELF A COPY OF “THE BALLS.IE GUIDE TO LIFE”

PS - In next week’s “unriggable raffle” competition we’ve a copy of “Six Nations, Two Stories” to give away courtesy of O’Brien Press, stay tuned for details!