Been meaning to start a regular “Throwback Thursday” slot for a while now - we have a lot of posts from other sites (like the old “Harpin2”) we’d like to transfer over here and this seems the best way to do it.

These will mostly involve contributions from guest posters, but to kick off we’ll go with this one I penned during the last World Cup in 2011.  It was quite an important post as you can see, for not only did I solve the World Cup turnaround problem, but also the game’s blazers clearly stood up and paid attention ;-)

PPS - It won’t surprise you to know EFS is still tweeting on this issue! 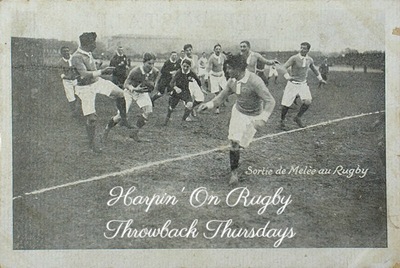 BUT...I have discarded the stupid comments and taken the valid ones from Eliota Fuimaono-Sapolu's tweets and tried to make them into a decent solution.

Here's an idea how to change the World Cup.

What I believe this format will achieve :

I've taken the current rankings and come up with a fictional draw by way of an example...

I think the cross-pools should go  AvF  BvE  CvD

This means that Ireland's four matches would be against Australia, Japan (yes, I know!!!!), Tonga and Chile and everyone else in our pool would also have to play them.  So although our main pool rivals would be our old World Cup buddies Argentina, we wouldn't actually play them BUT we'd be under pressure to get bonus points in all our matches to be sure and not only stay ahead of them, but also remain in contention for a "best runners-up" slot just in case we need it.

And what's more the format only adds 8 extra matches to the tournament, so it should be manageable.

Not suggesting this is a sure-fire system, just trying to get a ball rolling.   Does the process need tinkering with at all?  Have you a better idea? Let's be 'avin em then! JLP


ABOUT THE TBT AVATAR

Found the picture on a now-defunct (appropriately I suppose) site called Rugby-Pioneers.

Apparently it is a postcard with a photo taken from a match between France and Wales in 1911.