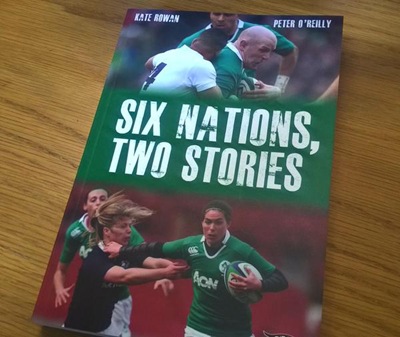 What precisely do we mean when we say “The Irish Rugby Team”?

That may sound like a curious question, coming as it does right after the opening weekend of a Rugby World Cup, but the publication of this book “Six Nations, Two Stories” is well-timed to challenge what many would consider the obvious answer.

The book begins with Kate Rowan, a freelance sports journalist who has done work for both the IRFU and World Rugby among others, outlining how she saw her task, not only chronicling the Irish women’s Six Nations journey this year, but also in outlining what makes the version of the game unique.

Peter O’Reilly is a correspondent with the Sunday Times who has been covering the sport throughout its professional era.  He also finds time to host a great weekly podcast with fellow “journo” Brendan Fanning called “Down The Blindside”.  So it could be said that the task of writing up the five matches of Ireland’s successful title defence would not only be one that comes to him naturally, but being of course a true fan of the Irish cause himself, it would also be one that is done happily.

The two authors offer eight chapters each standing shoulder to shoulder; the way they alternate back and forth simply yet brilliantly compels you to see the entire picture of what is really going on in senior Irish rugby.

You are not just treated to descriptions of what transpired in a particular match, but they are well complimented  by interviews with particular characters from the camp...on the women’s side we hear from coach Tom Tierney, skipper Niamh Briggs, and players such as Nora Stapleton and Ailis Egan, while the men are represented by the likes of Joe Schmidt, Paul O’Connell, Johnny Sexton and Mike Ross.

For the men we get extra insight into not only how the particular matches went, but how things were going for them personally in the build up.  There is also an overall narrative throughout about the general approach of Joe Schmidt which is very helpful to understanding how he must be handling his current task…

“No matter who you’re playing, he instils a belief that you can win the game if you do what he tells you to do.” - Conor Murray

On the women’s side, we get a similar look at how each match transpired for them, but also we appreciate how much hard work it takes for them to assimilate their passion for playing rugby for their country into their professional lives and personal struggles.

This brings Kate Rowan to the appropriate conclusion...

“...although certain aspects of the women’s game provide a link with the men of the amateur era, Ireland’s women are forging their own path into the future.  They represent the very best of modern Ireland.”

These are indeed two very different stories, but what this book does more than anything else is focus your attention on the fact that neither is any less an “Irish Rugby Team” than the other, and when this current World Cup is over the clock will only start counting down again to the women’s one which is to be held here in Ireland in 2017.

An absolute must-read any time of year, but particularly this one. JLP

PS - As much as I’d love to say I have “one copy for everyone in the audience”, our budget isn’t quite what it is down at RTÉ though we DO have a copy to give away in one of our upcoming “unriggable raffles”, stay tuned for details.

But if you can't wait for that, click here to order your copy from O’Brien Press