What would you do if your usual Tesco trip took a strange and unexpected turn? HEINEKEN recently put that theory to the test in a hilarious new video, ‘Fight or Flight’, as part of the premium lager brand’s ongoing sponsorship of Rugby World Cup 2015.

The video is part of HEINEKEN’s ‘It’s Your Call’ campaign, which gives Irish rugby fans the chance to be at the pre-match coin-toss at an Ireland Rugby World Cup 2015 game, simply by purchasing Heineken® at Tesco stores nationwide. Here, they are given a coin with a code on it. They use the code to play an online coin-flip game at www.Heineken.ie, where they could win one of thousands of pieces of official merchandise, or it could lead them all the way to the coin-toss at an Ireland game at this year’s tournament.

Horgan, who featured in the 2003 and 2007 Rugby World Cup tournaments for Ireland, said “I had a lot of fun making this video for HEINEKEN; it was great to once again put the unsuspecting Irish public to the test, and the results are unsurprisingly hilarious. It was great to receive some help from the Maori community along the way – hopefully that’s the last time they get one over the Irish this autumn!”

HEINEKEN Communications Brand Manager, Conor McIntyre, said; “HEINEKEN is committed to bringing Irish rugby fans closer to the Rugby World Cup 2015 action and our partnership with Tesco is one way for consumers to get to this year’s tournament, and be in the tunnel at a pre-match coin-flip as well.” 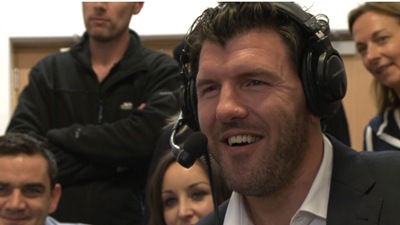