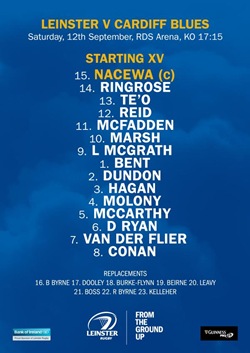 A home opener for Leinster against a Welsh region before Ireland kick off their World Cup campaign against North American opposition.

Of course I’m talking about 4 years ago when we hosted the Newport-Gwent Dragons on the Friday before Ireland played the USA in New Plymouth.  Both matches left Irish fans a little flat despite victory because it was felt a try-scoring bonus was left behind in both cases.

I dipped into the archives because I wanted to get a sense of where our thinking was at as Leinster fans before the last World Cup.  We were still giddy from that second half comeback against the Northampton Saints and as for Ireland, after a couple of indifferent Six Nations campaigns since the Grand Slam we weren’t sure what to make of our task against the Wallabies.

Now of course the feelings are almost perfectly reversed, and Joe Schmidt’s job-change in the meantime is probably a major factor in that.

But whatever about the World Cup kickoff being imminent, the Pro12 show goes on and it’s very important for Leinster’s chances this season that we make the most of our home encounters, so good and all as it will be to have pro rugby back at the RDS tomorrow, the boys in blue will need to get down to business.

For the second week running the name of Garry Ringrose hops skips and jumps off of Leo Cullen’s team sheet, though this time he actually starts!  I thought it curious he wasn’t given a run in Edinburgh yet now he gets a shot from the kick off, and it is great to see him get his chance at senior level.

As I said in my writeup of that match I thought the back line weren’t being used to their strengths but still I’m glad the McGrath/Marsh duo have been given another chance to do just that.  Noel Reid and Ben Te’o have the potential to be a prolific try-scoring duo in this World Cup spell and tomorrow provides a decent chance for them to show it.

Yet they will need the ball to do that, and for this we must look to our back row of Dominic Ryan, Josh van der Flier and Jack Conan.  I thought Dan Leavy did enough last week to warrant another start but VDF has definitely shown he can do a job as well.

Now I hope I can get this point across right...I’m a BIT surprised Isa is skipper, even with Kevin McLaughlin absent.  It has nothing to do with his leadership abilities at all, it’s just I prefer the captain to be in the pack and perhaps Dominic Ryan was better poised for the role on this occasion given the Blues’ back row is strong even without Warburton.

But overall it’s still a decent Leinster lineup given the absentees for World Cup, general injury and of course HIA reasons.

When it comes to our opposition, well it’s always hard to tell when the Blues come to town, isn’t it?  They have sent full strength teams to Dublin before yet still played like a pub team.  Not sure that will be the case this weekend, however...with a new coaching setup to impress and confidence high after a big win last Sunday, they should be well up for a contest on Saturday.

Josh Navidi will lead them out and he certainly knows how to cause havoc around the breakdown area.  Plus the Knoyle/Patchell halfback pairing, while young like ours, has the edge on senior game time so it could all boil down to who settles first.

Prediction time.  The bookies have Leinster by 8...I’m in a confident mood rugby-wise overall this weather so I’m going to back Leinster to beat that, just about breaking a double-digit margin.  Hopefully my crystal ball skills are at the same levels as they were for the corresponding match last season when I called Luke McGrath getting the bonus point try...hey - if I didn’t mention it, nobody else was gonna!!!! ;-)

Here’s to another quality evening at the RDS...see you there! JLP