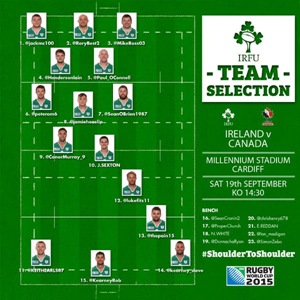 Check out at these links from our team of World Cup match reviewers….each is covering an entire pool and offered a preview ahead of the big kickoff.

Pool A by Big Joe Shep

Pool B by Ciarán Duffy

One way of saying the result of a match was one-sided is to refer to it as a “cricket score”.  Another is to say the losing side was “hockeyed”.

Given their national preference for the ice version, I dare say the Canadians would be well happy with losing to Ireland by a combined version of the above, ie a “hockey score”.

Does this opening mean I expect Ireland to dominate like Australia’s 142-0 drubbing of Namibia in 2003 (there are other examples I know but that’s one that actually resembles a cricket score) to open our campaign?

Eh, no.   Though it would of course be nice.

I’d be inclined to go the other way.  Of course we should win comfortably and I don’t even have too many problems with playing so many key players as we do...but should we reach a stage relatively early where 5 pool points are in the bag then as far as I’m concerned the foot needs to come way off the pedal and player protection becomes mandatory.

For example I can totally see a situation whereby we jump into a 28-0 lead only for the final score to be something like 42-21, letting in a Canadian try or three in the second half.  This would no doubt lead many to focus on the points conceded whether just out of a desire to be cautious or to have a reason to have a crack at the coaching ticket.

Look...our mantra here at Harpin Manor is #TrustJoe.  That doesn’t mean we won’t question any decision, but it does mean we appreciate he and his coaching staff not only have their own way of doing things, but also they actually get results with them.

Take the centre pairing.  I have harped on this many times before, but it is relevant for this match.  Did anyone have Henshaw & Payne to be the first regular 12/13 combo of the post-BOD era?  Heck no.

And on TV3’s World Cup show The Sin Bin last night (2nd episode big improvement on the 1st I thought btw), former England skipper Brian Moore commented that the way we utilise those positions doesn’t sit well with him.  And in a way I can see where he’s coming from...until you realise what it is that Joe is looking for from his centres.

At times you will see his 12 and 13 pop up and finish a try, but for me he has them in a much more defensive-oriented role.  Often after watching Joe’s Ireland play I have thought the likes of Payne were extremely quiet (like for example the recent win over Scotland), but on seeing the action again and checking the stats I notice that all the time they were busily working behind the scenes covering their tackling lanes while still popping up as more traditional backs when the moment required it.

So when you analyse the performances of Ireland’s centres this weather, not only must you do so by forgetting about how the positions are normally perceived, you must also forget about the role you are used to seeing player by that particular boy in green.  Which brings us to Luke Fitzgerald.

Any other time I’d raise three eyebrows at his selection at 12 if I had them.  Now, not so much as one.  Well ok...maybe HALF a one.  Yes, Luke is a step-off-the-foot-and-beat-you type of player but if Joe has put him in as his inside centre, then he is bound to have a specific role for him and I have a sneaky suspicion that he’ll get a lot of flak after the match that will turn out to be unwarranted.

Other positions of interest are 14 and 23. This is an extremely full strength team in most positions where our “elite” players are being used, supposedly for game time together.  Of course it’s a risk from an injury standpoint but we do want our combinations match ready when the bigger challenges come along.  So where is Tommy Bowe?  If he had a dip in confidence I would have thought this could be an ideal chance to get it back.

Devin Toner is another notable absentee from the 23 though at least Joe mentions him in the official team announcement post from the IRFU :

"Iain Henderson has played very, very well but Devin Toner has done a super job for us over last two years, and there is going to be a real contest (for the second row spot)."

And this statement supports my theory that the big Ulsterman has forced his way into starting reckoning.  The reason Devin might be preferred is that he takes the heat off Paulie in the area of calling lineouts but this match will give this pairing a chance to work together.

On the bench, of course the standout name is that of Mr C Healy and it’s great to see him back in the reckoning.  One can only assume he is on something akin to a “20-40-60” schedule of minutes ahead of the French match and here’s hoping it all goes to plan.

I couldn’t allow myself to post a preview without at least mentioning some Canadians...we all know their skipper Jamie Cudmore as will pretty much everyone in green playing against him.  Their starting wingers DTHVDM & Hassler have seen much Pro12 experience with Glasgow and the Ospreys respectively and their offence seems to focus on getting them space.

What I noticed over the course of their extensive warm-up schedule was that they can play well in patches yet struggle to maintain their focus for 80 minutes, with poor discipline especially at scrum time a constant problem.

They do however have some great names that jump off the teamsheet...John Moonlight at openside and an excellent ice hockey name accompanying Cudmore in the second row in Brett Beukeboom.

The bookies aren’t holding back with their spread for this match, and they have us by 41.  I am reminded of our November international against Georgia last year when they went for that very same margin and only missed out by 1 point.  Of course I hope they’re right, but with the stakes that much higher in this test window I’m going to stick with my theory that we may ease off in the latter stages and go with a more conservative 25 points.  There’s many that wouldn’t be happy I know, but with all that lies ahead for us then something like 48-23 wouldn’t be a bad rugby score from where I’m standing.

Let’s do this lads.  Best wishes to all the fans lucky enough to be Cardiff bound. JLP