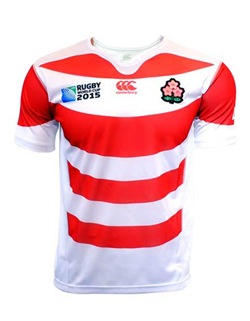 Life Style Sports has confirmed that, following the side’s historic victory over South Africa, the Japan RWC jersey has sold out. Against all odds the red and white hooped jersey, made by Canterbury and which had an RRP of €80, is now the Irish retailer’s third highest selling RWC jersey behind Ireland and the All Blacks.

Prior to their big win, only a single Japanese jersey had been sold but Sunday morning saw a surge of support for the team with the full complement of stock snapped up in 48 hours.

Commenting on the jersey sales Debbie Byrne of Life Style Sports said; “We feel Ireland has now chosen their second team in this incredible Japanese side. No one had predicted that win and likewise we couldn’t have predicted the record jersey sales, particularly a sell-out.

It has been predominantly Irish people who have bought the jersey and with Japan facing Scotland on Wednesday afternoon, Irish people want this inspiring story to continue and will be turning Japanese to show their support.”

A recent poll sponsored by Life Style Sports of over 30,000 sports fans has shown Irish people’s favourite RWC jersey is Argentina (24%) followed by Fiji (22%) and then Samoa (17%) and Ireland (15%) in third and fourth places respectively. Life Style Sports is the only retailer in Ireland to stock all 20 RWC team jerseys* and to browse the jerseys or for more information please see lifestylesports.com