Start your day with five eye-catching egg-chasing quotes & links from around the ruggersphere.
Click these links for our “8-0-reviews”
from yesterday’s #RWC2015 action
ITA v CAN     RSA v SAM     ENG v WAL

A crowd of around 90,000 is expected this afternoon, which would be the biggest crowd ever at an Ireland Test match.

All hands on deck for Ireland ahead of Wembley full house

Gareth Griffith - WalesOnline
Unknown agonies, these, for the shellshocked England fans filing out of Twickenham.

Andy Bull - The Guardian
If the appeal is unsuccessful, Galarza will not feature again in the World Cup, and the Pumas will not be able to replace him in their squad.
Galarza appeals long ban
Rate The Ref
Tough but epic game @ChrisRobshaw . Still all to play for against Oz. Hope Wales can get backline together for Fiji! 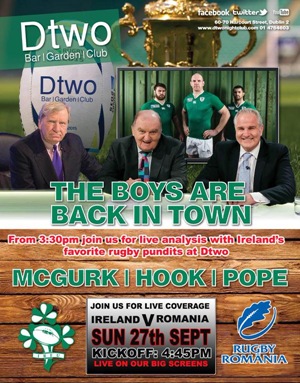