An unconvincing start to England's RWC campaign saw difficulties for large periods in gaining momentum against a Fijian side who despite strength in defence, dominating 1 on 1 contact and turnovers, were unstructured and lacked cohesion playing more akin to a 7s side despite a brilliant Nadolo try. Two tries in either half though and a rejuvenated England largely through wholesale changes in the last quarter and Mike Brown’s brilliance saw them scrape home with a BP win 35 - 11.
Match played at Twickenham on Friday, September 18, 2015

@bigjoeshep is the Owner and Head of Information & Knowledge Management at Digital Knowledge Zone.   An avid Leinster & Ireland Rugby fan, he came to rugby at the late age of 24, was a tight head prop, had at least 2 good runs in every game and retired at only 36 after 3 operations on his legs and now forms the 4th "virtual" person in a front row each time his beloved teams are playing (much to the annoyance of his suffering girlfriend who has to put up with being "embraced" by the Big Fella at each scrum!!!)
Harpin On Rugby's RWC "8-0-reviews"
are brought to you by
FRONT UP RUGBY
A rugby inspired lifestyle brand for men. 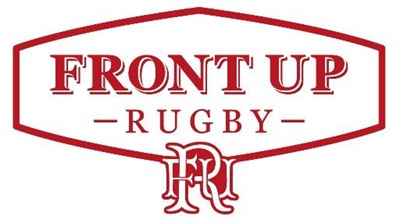