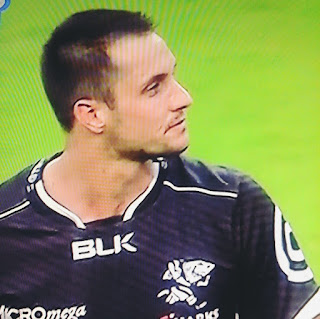 So earlier this week we had reports that scrumhalf Conrad Hoffman of the Sharks Currie Cup/Super Rugby outfit was being looked at by Leinster for a possible 3-month deal as cover during the World Cup.

Nothing has been formally announced as yet, but as it's an off week we decided to have a look at his career and performances throughout the Super Rugby season just gone to get an idea what kind of role he could play in D4 should he make the journey.

Well for the first, easy part of the research, we did the whole Wikipeadia thang.  Chap's been around - coming up at Western Province and moving on to the Stormers in Super Rugby yet with just the 1 appearance between 2008 and 2011 it would appear injury may have hampered him - he came back to top action with Natal and bar for a 2014 stint in Canberra with Jake White's Brumbies has been there ever since.

Then we looked at the Sharks' disappointing 2015 Super Rugby campaign to see how much action he saw.  It wasn't much.  Just the one start against the Force at the end of March - the rest of the time he was a little-used sub, mostly making 2- and 3- minute cameos at the end of matches.  He wasn't able to dislodge the regular starter Cobus Reinach.

But that wasn't enough for us...we wanted to actually see him in action so we got a recording of that clash with the Force where he got all of 60 minutes from the kickoff, playing as halfback alongside Francois Steyn.

Yeah - let's just say I could see why he was getting so little game time.

OK - maybe that's not ALTOGETHER fair on the chap...it was altogether a dismal outing for the Sharks where they couldn't muster a single point in the first half and however mediocre Hoffman was, Steyn was worse.

In the interest of full disclosure, here are the notes I took as I watched...


Below you see a Vine of that tackle I mention in the notes...


But even THAT wasn't enough research for us...we got in touch with Rob Otto, editor of Sharksworld.co.za (a "Harpin On Sharks" of sorts, if you will...or should that be "Sharkin On Rugby"?) for an online chat to get some low down on the player, and he very kindly agreed to share some thoughts - here's how it went...

Just looking to do a piece providing a bit of fan-driven info on Hoffman but first maybe you can give a brief description of Sharksworld and its history?

I guess very similar to what you do for Leinster.... fan-driven blog site about the Sharks been up and running since 2008 popularity has waxed and waned over time, but we have a pretty hard core readership

Now to Mr Hoffman - I had a look at his one Super Rugby start last season against the Force...would I be right in saying "Ruan Pienaar he ain't?"

I've been trying to work up to this conversation  :)

I always try to be as nice as I can about players.... but shit. Hoffmann has been a disappointment in Sharks colours can't really put it any more plainly than that

Yeah the fact that it was his only start for the whole season doesn't bode well...the rest of the time it seemed to be 2 to 10 minute cameos at the end of matches, if at all

yeah look - the whole Super Rugby season was a disaster for the Sharks...Conrad really suffered a lot from injuries. They allowed others to leapfrog him at WP, but it was still seen as a coup when the Sharks first signed him in 2011 he was with us for 2 years and spent about 18 months of that time injured

Basically at Leinster we're not looking for a Ruan Pienaar...

we have two test 9s who will probably be away during the RWC and 2 up and coming ones who have limited game time...essentially we need someone who can, to use the cliche, "come in and do a job" in the Pro12...

...after his spell at the Brumbies, he came back to the Sharks and has actually managed to stay injury free for almost a year

... in fact, after his first Sharks stint, he retired from the game, before Jake White took him to Canberra so Conrad is under no illusions anymore about being a test player in waiting

That's some brilliant info thanks Rob!  Now enough about soon-to-be-ex-players-you-care-about lol one final question before we wrap - how are the Sharks looking for the Currie Cup this year?

an unknown quantity...lots of new players...so I reckon we're probably in "dark horse" territory, but in reality, most likely losing semi-finalists

Great stuff.  Well many thanks for the taking the time for the chat Rob and best of luck to the Springboks for the World Cup...here in Ireland we'll look forward to meeting you in the final haha!

I wish I felt at all confident that we'll get that far, mate! But thanks all the same!

So there you have it.  With Pro 12 and B&I matches to cover during the World Cup I guess he's just about the guy we need - hopefully priority will be given to the likes of Luke McGrath and Nick McCarthy but from the looks of it Hoffman will be well aware of where he will fit in.

One thing's for sure...after all this work he bloody well better come to Dublin now! ;-)

Many thanks again to Rob from Sharksworld for the info.  JLP
at July 30, 2015