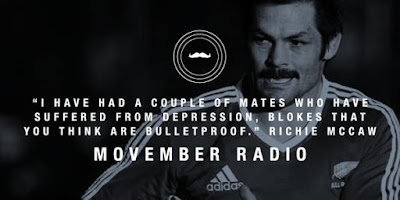 As part of the recently launched "Movember Radio" series, Rugby legend and All Black captain Richie McCaw opened up about the pressures and expectations that come with the job.

The World Cup winner goes into detail about how rugby players deal with mental well being, and the struggles that come with not talking about their issues.

McCaw admits to doubting himself as he struggled to come back from a bad concussion injury in 2004, and how that left him in a dark space.

The back-rower goes on to say that as a youngster, he felt invincible and never felt the need to talk. But despite all of his success on the field, his experiences have shown him that talking to a friend about issues can really help.

"I used to look at the older players and how they approached things mentally, and I used to say 'just get on with it.' But one of the best things I've realised is that talking to others who have been in similar situations, actually takes the weight off your shoulders, and that it's normal to go through those things."

All of these topics are incredibly prevalent in Irish society, and Movember is urging men to talk to one another.

Movember radio was launched in June 2015 to continue the conversation on men's health and issues that men face. So far, Mo Bros such as pro surfer Tom Carroll, Movember CEO Adam Garone, former footballer and cancer survivor PJ Roberts, and Paralympian Kurt Feanley have all appeared.

Each episode is presented by Osher Günsberg, and will challenge people across the globe to re-think what it really means to be a man today.
at July 03, 2015