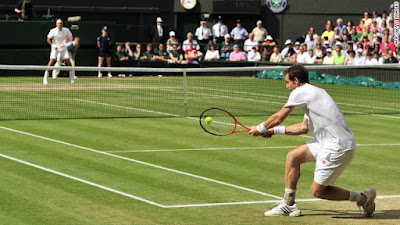 This is the quietest weekend of the year for top level 15-man rugby union.  There's only South Africa v Toulon World XV to keep us occupied and it isn't even live on Irish telly.

So in our desperation to have something to talk about, we have to the other sports having some "major tournament" time to try and find a way to discuss egg-chasing.  There's The Ashes and Tour de France going on but we have turned to Wimbledon this time around.

On Friday afternoon we threw out a query to our readers about t'internet to see if anyone had suggestions for a rugby XV made up of top tennis players, male or female, past or present.

Here are some of the replies we got...

Andrew Agassi at 6 and John McEnroe at 7 no one will mess with him. - Denis Brennan

Definitely some interesting suggestions there, particularly regarding Serena as it was she (or to be more accurate, her thighs) who was the inspiration for this post in the first place!

But while this wasn’t meant to be a competition, w do still have a “winner”.  Mark Jackson on twiiter definitely gave this the most thought and we’re very much liking his XV…

A virtual generous serving of strawberries and cream is now winging its way through cyberspace to Mark.

Many thanks to all who had a go.  Feel free to pass on your own suggestions if you have them we’ll add them to the post.

Or alternatively, if you can somehow make time go by faster to the RWC2015 warmups that would be even better! JLP