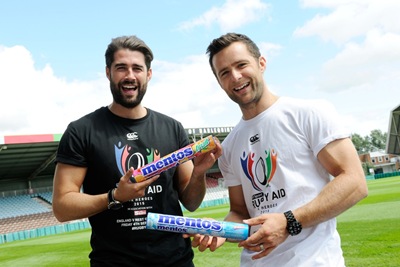 Mentos has been unveiled as an Official Sponsor of BT SPORT RUGBY AID 2015 In Association with The Sun.

The event in aid of charity Rugby For Heroes of which Mike Tindall MBE is Patron, sees celebrities and some of the greatest former professional rugby players battle it out in an England v Rest of the World fixture at Twickenham Stoop, home of Harlequins RFC, on Friday 4 September. Rugby For Heroes raises funds and awareness through the sport of rugby, the fan community and the wider professional player network, to support military personnel who are making the transition back from military service to civilian life.

In what is believed to be a UK first, the Twickenham Stoop posts and cross-bar will feature the Mentos logo, delivering a prominent presence when a penalty or conversion is scored during the event which will be televised live on BT Sport.