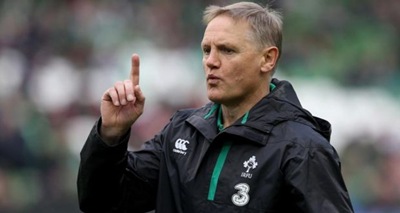 This was originally meant to be a writeup for South Africa’s win from the weekend just gone, but having seen the match my heart just wasn’t in the task of harping on a “contest” which had about as much relevance to the rugby world as Harlem Globetrotters fixtures do for the NBA.

I mean don’t get me wrong...the “World XV” concept has been going for a while now for the Springboks and fair play to them; it’s just with the exception of John Lacey being the referee, as an occasion there was little to interest anyone outside the South African rugby bubble, not even the other teams in their RWC pool.

So what say we take this week’s Monday article in a different direction...there’s less than 10 weeks left until the start of the World Cup and now is as good a time as any to give some preliminary thoughts on Ireland’s chances.

One thing is for sure...you won’t see a single word written here about who I feel should be playing in any particular position.  That’s partly because just this once I want to steer clear of all the provincial crap (have I named too many Leinster players?  did I mention Connacht enough?  did I unwittingly insult a Munster man?  or maybe it was willingly ha ha?) but also because this particular Irish World Cup campaign is about more than the personnel.

Today what I want to focus on is three general areas I reckon we as fans need to keep in mind before we even begin to contemplate who should make the matchday 23.

Ireland has always been among the leading rugby nations, yet reaching the final four of a World Cup has always been our holy grail and the expectations for our squad will be higher than ever going into this tournament.   Being two-time Six Nations champs and ranked 3 in the world is bound to do that.

But playing well as favourites isn’t exactly something at which we excel on these shores, especially in team sports.  Much has been written about the 2007 campaign and I don’t wish to drudge it all up here but back then we were “only” ranked fifth in July ahead of the finals and we couldn’t turn those expectations into results.

This time it has to be different.  And that is because the expectations are very different.  If we’re meant to be the best test team in Europe, and we play like it at the World Cup finals, then the logic follows that we must surely be contenders to not only do well, but also better than everyone else.

Yes, folks, I’m saying we can actually win this thing.  Not that we will, nor that it will be easy, but just that we can.

What is this guy doing?  I hear some of you cry.  You’re not supposed to say that, you’ll jinx it!!!  And what’s more you’ll give our opposition a stick to beat us with if we fail!!!  Somebody shut this site down before Pagano does any more damage!

Hey - I know all about that mindset.  I may have been born in the US where positivity is in the DNA, but I grew up here in Ireland and I’ve followed the Irish rugby team through times both amateur and professional, and through times both successful and very much not.

I just think that with this particular Ireland set-up, it’s important to get away from that modest approach.  Away from that whole “ah sure as long as we do our best it’s ok” thing.  It’s clear that from the coaching staff to the senior players right the way through the squad there is a belief that success is always within reach - all I’m saying is as fans we need to match that belief.

The importance of accuracy

This is a curious heading in many ways, because it comes with an implication that Joe Schmidt and in turn both Leinster & Ireland rugby somehow “discovered” the need for accuracy (or as I try and usually fail to say in his accent, “ekrissy”) in the past few years.  Of course that’s not the case at all.

Having said that, his trophy-winning record since arriving on Irish shores also comes with an implication...that he’s doing something right, and listening to those who have worked with him, and indeed having seen him in action at coaching sessions open to the public, it is clear that his particular style is based on not only demanding perfection himself, but also instilling that demand within each and every player.

So this is another area where we as fans must try to start thinking the same way as we’re watching the action.  Take these three hypothetical match situations…

In the first case, the very minimum expectation is that after one or two phases we will have excellent attacking ball on or around the opposition 22.

In the second, of course the ideal would be for us to retrieve our own kick and we’ll do everything we can, but if an opponent makes the catch there needs to be  at least enough support so that even if he gets a pass away there is plenty of pressure on the receiver.

And finally in the defensive scenario, one line break should never a try make - the scramble is expected to not only halt the progress but eventually repel it altogether.

To routinely succeed in all of the above involves a level of focus from players 1 to 15 many would have thought impossible in the past.  In fact, it probably is impossible to expect it every time.  But there certainly is nothing wrong with at least striving for those levels, and when something goes wrong you can be sure questions will be asked by the coaching staff.

But just to make things interesting, while we’re getting used to the expectations for both success and accuracy, there’s a third, slightly obscure category which I feel is equally important, if not more so…

Be ready to play without the playbook

If I had to pick three matches during Joe Schmidt’s reign as Ireland coach which would help him prepare for RWC2015 the most, I reckon it would be v New Zealand in Nov 2013, v England in February 2014 and most of all v Wales in March 2015.  All of which of course we lost.

Against the All Blacks, for the final quarter we seemed to let the attitude I mentioned earlier creep into our psyche...that despite amassing a 19-point lead there was some kind of inevitability that we’d be caught and that ended up being true.

Or, you could have a situation like that we had against England when we weren’t the only team on the pitch which was well-drilled and hard to beat.  And into the bargain we were in many ways “hoisted by our own petard” - I will always remember how that match at Twickers both began and ended with a successful English choke tackle.

And finally, and in my book the most worryingly, we had the Millennium Stadium when, from our point of view anyway, we were thrown an early curve ball by the referee and couldn’t respond.  Yes, the Welsh were up for it that day more than we were, but I was concerned that we weren’t able to adapt in time to get our way back into it.

Fine tuning the roles for the 15 men on the pitch can only get you so far.  I know I’m stating the obvious when I say there’s another 15 men opposite trying to beat you and a full coaching staff behind them, but my point is that even if your preparations don’t bear fruit from the kickoff it is still possible to knuckle down and grind out a victory, and we have to be ready to do just that because you can be sure we’ll have to do it at least once, especially as we go deeper into the competition.

Just ask the All Blacks - the 2011 final is probably one of the best examples out there of grinding out a victory when not at your best.  This ability could be the final piece of the puzzle Joe will be looking for, and it’s definitely a hard one to find.

So to summarize, we need to raise our expectations, demand accuracy yet be ready for a scrappy contest or two.  Simple, right? ;-)

Hey - I’ve lived by the hashtag #TrustJoe since he took the reins and I see no reason to abandon it now.  And that’s not just about him, it’s about everyone in the organisation.

As they begin their preparations in earnest, here’s hoping we can make our belief in them known in every way we can in the 67 days between now and the big kickoff.  Here at HarpinOnRugby we will certainly offer all the space possible to help you do just that.  JLP

Next week we’ll be back with the match writeups and we’ll feature the Rugby Championship clash between Australia and South Africa.  In fact, here’s a schedule of our featured matches between now and RWC2015 (dates mean the Monday of publication, not the date of the fixture)