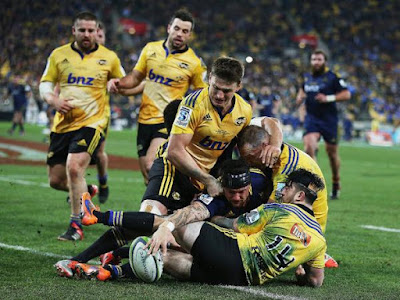 After Barrett finally found his kicking boots to start the second half narrowing the gap to 5, Dixon was involved yet again in his side’s second try. After spurning two penalty advantages in and around the Canes 22 they created the space out wide and though Dixon could have probably made the line himself he had the presence of mind to ship it to his winger Naholo (who moments earlier forced the turnover that started the attack) who powered his way over and there were no doubts about this finish.

Then it was time for Sapoaga to miss a placekick and when Barrett pulled the margin back to 7 at the 54th minute mark, you felt the contest was far from over yet while the Hurricanes never stopped going for a second try, it seemed beyond them, especially when Julian Savea dropped a pass with the line at his mercy (on second thought this may have been a mild dose of white line fever!).

As the second half progressed and the Highlanders built themselves a lead worth taking home, their approach to possession evolved to a point when it was definitely a more traditional form of “finals footy”. And who would blame them? For me they were just as impressive seeing out the final ten minutes as they had been all season with their positive approach to the game and whatever about the fourth-place finish or suspect Dixon try they are worthy champions.

When you look at the preliminary All Blacks training squad for the World Cup, there are more Hurricanes on the list than Highlanders, yet with a championship on the line at the “Cake Tin” they were better than their opposition LITERALLY from jumper 1 through 23. Loosehead prop Edmonds was part of a solid front row while Marty Banks replaced Sopoaga for those final minutes and even sealed the win with a drop goal.

So all that’s left for me to do is congratulate head coach Jamie Joseph, Edinburgh-bound skipper Nasi Manu and everyone involved with the Otago-based side for a well-deserved maiden triumph. This was a highly entertaining final and a perfect way to round off senior provincial rugby ahead of the World Cup. Here’s hoping Ireland can show a similar taste for finals footy in October!!! JLP

Next week our Monday match writeup will feature the clash between South Africa and the Toulon World XV.
at July 06, 2015