Many thanks to all who Liked, Shared and RTed our All Blacks tweet earlier today 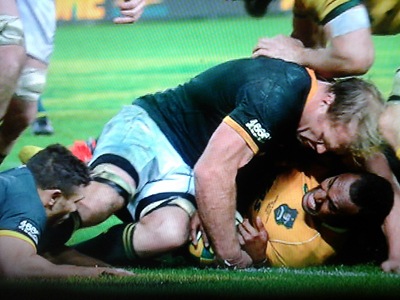 THINKING OUTSIDE THE BOKS

As Irish rugby fans we’re still doing all we can to while away the time until the World Cup & new provincial season begins in earnest...sure, with the warmups starting in August the wait is shorter than usual, but somehow that doesn’t make the month of July any easier to get through.

Thankfully we have The Rugby Championship to help us along the way, and after the All Blacks kicked things off with a right tonking of the Pumas on the Friday, we had the Wallabies and Springboks squaring off in Brisbane.  If Ireland are to meet either of these two sides in the upcoming World Cup, we will have gone further than we ever have before in the competition.

Last week instead of a match writeup I had a preliminary look at some general areas Ireland need to work on in preparation - for me the most crucial one for Joe Schmidt & co is the ability to throw away the playbook and grind out a victory when you find yourself in a tight, scrappy contest going into the final quarter and with impeccable timing these two sides served up 80 minutes to provide a perfect example of what I’m talking about.

Make no mistake...while both teams have areas for improvements, there was plenty on display to show that they’ll be there or thereabouts when the field gets whittled down to four at the World Cup.

On the South African side, Heineke Meyer has himself one hell of a core squad of players to choose from.  It really ticks all the boxes...there’s the experience of Victor Matfield and Bryan Habana, and the upcoming talent of Handre Pollanrd and Eben Etzebeth.

And beyond the expected starters we have seen there is talent waiting in the wings - before this summer I’d have assumed de Villiers and Englebrecht could be one of the World Cup’s top all-round centre pairings yet despite injury setbacks Meyer has a more than decent replacements in De Allende and particularly Jesse Kriel.

And despite being the away side on Saturday the Springboks amassed a 20-7 lead with some good finishing but most of all a scary level of accuracy at the breakdown on defence.  Maybe the Wallabies had a few clearing out issues but not every side is able to take full advantage and the Boks put out a warning to the rest of the rugby world to be extra careful with the ball at the breakdown otherwise the likes of Francois Louw, Schalk Burger and particularly Bismarck du Plessis will be all over it like a rash.

The tries were well put away by Etzebeth and Kriel either side of half time, and with the lead in double digits it really looked like the result was in no doubt.  But before we look at how things started to go wrong for the visitors let’s see how the home side were doing up to that point.

Michael Cheika’s Wallabies were actually the first to cross the whitewash and it was a decent score in it’s own right, forged on the training “paddock” with the prodigal son Matt Giteau pulling the strings and Adam Ashley-Cooper providing the finish.

But while it was good to see they were able to take opportunities, there wasn’t a lot of evidence that something could be made from nothing with what was, to be fair, quite the makeshift backline for the green and gold.  For all the quality in the Genia-Cooper-Giteau axis, if they are to be the starters in that Pool of Death at the World Cup, you’d thin, they’ll need a lot more time together in match situations - though they’re not going to get it now with injuries.

Then there’s the turnovers...18 conceded is too many whether you end up victorious or not and there needs to be some serious question marks about their decision making.  For example, Israel Folau will be remembered in this game for a series of high catches and this is true, but on his first one he set off on a run which took him towards a group of Springboks and away from a group of team-mates with exactly the expected result.

Yet despite being behind their opposition in most key areas on the park, they were able to claw their way back and pinch the match points.  Why was this?  Let’s have a look at the substitutions.

No sooner had Pollard nailed the conversion of Kriel’s try than his coach took off his entire front row and replaced it with Strauss, Heinke van der Merwe and Malherbe...none of them slouches by a long shot, but right from the get go the Wallabies began to gain advantage in the scrum.

Meanwhile Cheika’s changes were having a positive effect...Phipps for Genia was enforced at halftime but when former skipper Horwill came on he set about making a nuisance of himself around the park.  Then in the back row we had the fascinating introduction of David Pocock with his supposed nemesis Michael Hooper still playing.  Certainly a decent answer to a losing cause at the breakdown!

But the change that made the biggest difference was Matt Toomua for first Cooper and eventually Giteau.  The Brumbies “five eighth” provided the right amount of stability the home side needed and suddenly the match looked winnable, and sure enough by the end, it was.

The first of the two tries that pinched the spoils was thoroughly deserved by Hooper after he flew off a 5-m scrum with a Boks feed to turn it into an attacking set-piece from which he was able to crash over the line.  He really has done well to force Cheika to leave him on the park while playing Pocock...though I’d thoroughly recommend a pre-World Cup haircut given the amount of time he has to spend brushing it back!!!

Finally we had the last-ditch touchdown by Kurindrani.  A tough call for the TMO but for me it definitely disturbed a blade of grass and the right decision was made.

Yet for all the late resolve of the home side I’d be more inclined to wonder if it was all about their fighting their way back into the match or were they invited by their opposition?

I suppose it all depends on how seriously you take this match, or more to the point how seriously the South Africans did.  Sure, any clash of these two powerhouses is going to be a big deal and sure, the Tournament Formerly Known As the Tri-Nations is a big deal in its own right,  but let’s face it...even when there are trophies on the line between now and September, every test match is effectively a “warm-up”.

For this reason I guess I can give the Boks a bit of slack for letting this lead go - they probably wouldn’t completely change their front row if they had a 13-point lead on 47 minutes in a RWC knockout fixture, nor would they probably continue to give opportunities for Folau to make his leaping catches even though he was getting better at it as the match wore on.

And despite the result I would still have a feeling that Meyer is the coach in the better position heading into the World Cup because he seems to have a better sense of his personnel and the way he wants them to play...to be fair to Cheika, due to circumstances beyond his control he is still playing catch-up in his role but he will need to make some big calls in key positions very soon.

To finish, I’d like to point to two incidents in the match, one I really liked, the other, not so much.  Both happened in a frenzied finish to the first half right after the Springbok try.

The restart fell hopelessly short of going the 10 metres...Wallaby skipper Stephen Moore was among the players who just stood off it to let it bounce and wait for the Boks to take their scrum - yet with a brilliant presence of mind that belied his years, Etzebeth, who had just scored the try, chose not to wait around and grabbed the ball to put his side in a very strong position to pinch another one before the break.

Then there was Quade.  Ah, deary me, Mr Q Cooper.  I know you can always expect the unexpected from him, and for the most part I’m generally a fan of his for just that, but having turned the ball over in your own 22 with the clock red at the end of a first half where you have just gone behind on the scoreboard, NOBODY should get away with a “behind the back” pass.  And yes, while the ball was lost and the Boks had a second go at the Aussie line, it was Cooper himself that forced the steal on the goal-line to spare his blushes but I wouldn’t let him off the hook for that and I doubt Cheika did either.

And last but definitely not least, many congrats to both the Irish men’s and women’s 7s teams for their superb outings in Lisbon over the weekend putting them into the final stage of Olympic qualification next year.  I wonder if there’s a chance it could be held here?  JLP