"Why is rugby so important to you?" 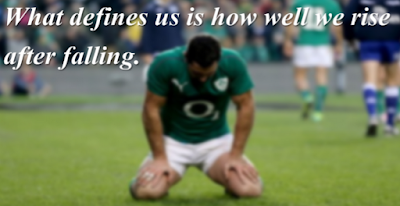 This post is a little bit different to my usual content, it’s more personal than anything I’d normally write about but I felt it was important to share my love of rugby with you. I tried to be as honest and frank about how I feel about it and it took a while before I was happy enough with what I’ve written to actually publish it.

I’m glad to say, as rugby is a fast growing sport in Ireland, I am most definitely not the only 16 year old girl who likes it. However, I have yet to meet someone my age as crazy about rugby as I am. That has its drawbacks. It means my friends are disinterested in what I would consider one of the most important things in my life, I annoy my mam with the amount of time I spend parked in front of the television studying religiously any match that’s on. I have to endure the slagging I get for being head over heels in love with it. I’m being put down for what? For being passionate about a sport. Joke's on you because rugby for me is a support network. A family, blue or green.

Being an Irish and Leinster rugby supporter gives a sense of belonging. There’s still something surreal for me about sitting in the Aviva among 50,000 people singing Ireland’s Call harmoniously (well almost). Where else can you find that sense of unity, strength in numbers and comfort?

Whether you’re young or old, from the North or South, it brings people together. Banter between fans supporting different teams but shaking hands at the final whistle because the better team won, mutual respect among players and supporters. Sure Mandela used the Springboks to bring a nation together. Maybe I’ve watched Invictus too many times. It certainly brought me and my dad closer anyway. It’s a fantastic ice breaker - I’ve even mentioned it in job interviews and got lucky as the interviewer was also an avid Leinster supporter.

As I near the year of the dreaded Leaving Cert, I’m considering all my options career wise. I don’t want to sit at a desk simply looking at numbers every day for the rest of my life. In fact I can’t think of anything worse. If I’m going to spend nearly half of my life working at something I want it to be something I’m passionate about. People say if you enjoy what you do you’ll never work a day in your life. I haven’t decided what direction I’m going in yet but it would be nice if it brought me even closer to rugby. Writing, photography, even medical professions like psychology.

When I was younger I had plenty of hobbies but I never stuck to any of them. Keyboard, football, badminton and basketball lessons couldn’t seem to hold my attention for very long. I’ve finally found something I’ve stuck with, writing. Playing to your strengths I’ve learned is probably the best way to move forward in life and after a few years of listening to English teachers badger me saying I have a good vocabulary and writing style I’ve finally taken their advice. Career aptitude tests don’t lie so why not pursue Journalism? Forget the points race everyone is obsessed with recently around exams, I’m just not “doing” pressure anymore. It’s ridiculous so we’ll see where this road takes me.

Why does it mean so much to me? It’s something to look forward to at the end of a difficult, stressful week. No matter what’s going on in my life, nothing can wipe the smile off my face as I walk through Old Belvedere car park on a Friday night in the lashing rain on my way to the RDS. I suppose it’s an escape.

The wins are exhilarating, the losses usually heartbreaking. Back to back 6 Nations were incredible, seeing Ireland beat the Springboks in pitch side seats, amazing. Watching Ireland beating New Zealand from the couch at home with eyes wide with disbelief, only to witness one of the most heartbreaking defeats I think I’ll ever see in the game. A close up of Brian O’Driscoll with his head in his hands appears on the screen, there’s a lump in my throat and a sick feeling in my stomach.

But we moved on from that to become even more successful. There’s plenty to learn from the sport, from any sport. I’m much more committed and loyal than I used to be, a trait I now look for in other people. Leinster could lose every single game they play for the next 15 years and I’d still be there every Friday night without fail. It has taught me you can only really ask of others what you’re willing to do yourself and also to not give up at the first hurdle you come to.

Want to see your own rugby opinions on the web?
Click "Write for us" in the sidebar to find out how.
at June 05, 2015