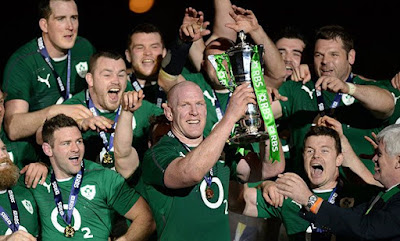 In the video clip below IRFU chief Philip Browne outlines the importance to Irish rugby of the Six Nations being open to receive TV money from all sources, not merely the "free to air" channels.

If you support the IRFU's position and wish to help them lobby the Government you can copy the message below (filling in your own details where necessary) and either email it to majorevents@dcenr.gov.ie or send a hard copy through the post to :
Major Events Coverage
Broadcasting Policy Division
Department of Communications, Energy and Natural Resources
29-31 Adelaide Road
Dublin 2
before the deadline date of this Friday, June 12.

This submission on the Designation of Major Events is made based on my own personally held beliefs and in the interest of safeguarding the future of Rugby in Ireland.

It is my considered belief that designating Ireland's RBS 6 Nations games on a live terrestrial TV basis could have a seriously negative impact on all aspects of the game in Ireland.  The potential loss of current and future TV revenues will not only affect the competitiveness of our professional teams it will also affect the level of investment the IRFU can make in grassroots rugby.

I have genuine fears such a designation will devalue the Irish TV market which in turn could lead to a significant decrease in available revenue to support the future growth and success of the sport.

I believe that the risk of a reduction in Irish Rugby's revenues by up to one fifth would result in the following:

I would ask that the Minister considers these very serious concerns before making any decision on designating Ireland's RBS 6 Nations matches as listed events.