Worcester get booted back to the Premiership

It's not often I harp on RFU Championship rugby here but WHAT a match at Sixways last night.

It was the 2nd leg of the final between the Worcester Warriors and Bristol.  The home side had come down from the Premiership last season while the visitors had spent a king's ransom (comparative for clubs in that tier anyway) over the past few seasons to get back up to where they feel they belong.

The Warriors won the first leg at Ashton Gate by just a point and actually pulled away even further here before a second half surge by Andy Robinson's Bristol established what looked like a winning lead with just over 5 minutes to go...


...but the Warriors weren't done.  First one yellow card then two led to not one try but two leaving Ryan Lamb a conversion with the clock red which literally meant the difference between Premiership and Championship rugby for the two clubs (see Vine clip). 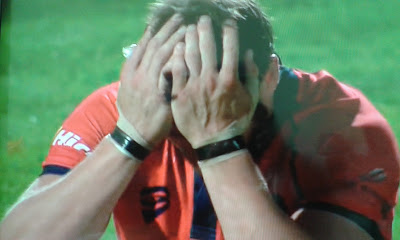 You'd have to have a heart made of stone not to feel for Bristol Welsh Rugby and their supporters, but it was certainly quite the spectacle for the neutral, especially one watching on DVR feeding a 3-week old baby at 2 in the morning!  JLP