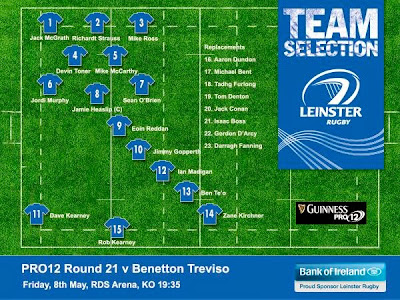 Obviously I'm disappointed with Leinster's progress this season, especially in the Pro12, but I sincerely hope the reasons for my absence from tonight's match aren't seen as anything other than the family commitments they genuinely are.

And even without the implications of tonight's results when it comes to European qualification, this match at the RDS is more than likely the last chance for the Leinster faithful to see two legends of the game, Gordon Darcy and Shane Jennings, as active players on the roster.

Note the words "more than likely".  Pretty much every rugby commentator who was calling for changes to the Heineken Cup has gone to great lengths to point out how much more interesting the Pro12 has become with the new qualification rules.  And it's true; this season, the league has worked out in such a way that the race for the 5th and 6th slots could well remain competitive right up to the final stages of the final round of regular season fixtures.

But while Leinster's woes this season have largely been brought upon ourselves, the fact remains that the new rules are proving a major headache, not only for us, but also for Joe Schmidt's RWC2015 preparations.

It's widely known that this season the top 6 clubs in the Pro12 qualify for next season's Rugby Champions' Cup.  However not many seem to know that the 7th placed clubs in the three major domestic leagues also go into a playoff series for the 20th slot,although Gloucester will represent the Premiership as they won the Challenge Cup.

So the way the Pro12 now stands, even if Leinster defeat Treviso with a bonus point tonight, should Edinburgh do the same to the Dragons (very likely as they played them off the park in their Challenge Cup semi and the Men of Gwent have little to play for) and the Scarlets do likewise for the Blues (also likely for similar reasons) then we will need to go to Murrayfield in the final round and get a result to guarantee European rugby.

And sorry if you think I'm scare-mongering here but I feel I need to point out the worst-case scenario...should we be caught by both Edinburgh and the Scarlets, we would then have to get through not one but two extra matches to ensure Johnny Sexton won't be confined to playing next season's Challenge Cup!  First we would need to win at Kingsholm (after the - ahem - "draw" for home advantage was made during the week) and if we do that we would then have one more match in D4 against Top14 opposition which would be Montpellier if the season ended now.

So as you can see, our season is far, far from over as there is much at stake for Leinster over the coming weeks.  And given we supply such a large portion of the Irish squad, it would be something of a silver lining for them to have an extra couple of weeks off.

Now I have harped on many a time this season that I'm not crazy about the backs selection that this current coaching set-up has gone with.  But by the same token I am aware that this is their preferred lineup and given the circumstances I'm hardly surprised they have stuck with it.

It's definitely a quality lineup on paper and they just have to knuckle down and get the job done both this week and next; there are no two ways about it.  We'll need the display from Marseille replicated and this time without any mistakes.

And while it's not as though our opposition will be near Toulon's 3-peat standards, not only do Edinburgh have Champions Cup ambitions...as I pointed out here on the site a few weeks ago, Treviso are also in a battle for qualification, albeit in the form of something of a "race to the bottom" with their fellow countrymen at Zebre.

So for us to make it over all the remaining hurdles, we need to dig deep and banish the demons which have been at us since February in particular.  We need quick, reliable ball from our halfbacks.  We need those first up tackles to be made.  And for the love of all that's holy, when we have an attacking lineout in our opposition 22, please, please, PLEASE let us win the feckin thing!!!

Despite my pointing out the doomsday scenarios earlier, I am confident that we will be able to avoid them over the coming weeks.  And given that I can't be there tonight I will need you to cheer that little bit louder in my stead because now more than ever they boys in blue need to know we're behind them.

Over the next two weeks I'm backing us to get qualification sorted and for one from Edinburgh and Scarlets to slip up enough for Connacht to at least have a shot at that playoff spot themselves, and that of course would most definitely be an excellent outcome for Irish rugby.

This really is a bizarre state of affairs - my missing a match at the RDS in May while at the same time hoping against hope we don't have another one in a couple of weeks?

Crazy stuff.  Again, please cheer the lads on for me tonight, particularly Messrs D'Arcy & Jennings.  Win lose or draw their contributions to rugby in the province over the professional era cannot go un-honoured. JLP