All involved in Irish sport will be mourning the passing of broadcast legend and true gentleman Bill O'Herlihy today.  RIP 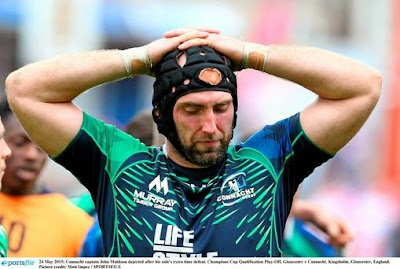 First of all, if you came to this post via social media I hope you appreciate my Thierry Henry reference was completely tongue-in-cheek.

However, as much as I hate focusing on refereeing decisions when writing up rugby matches, in this case I feel I have no choice.  Yet before I harp on the incident, I first feel the need to clarify my overall position on the matter.

Back in the days of the Heineken Cup, even before all the palaver which led to its overhaul, there was a consistent narrative spun in general rugby commentary outside the Irish bubble, from media social to mainstream, from the extremist so-called fans on the fringes to some of the more well-known journalists.

It suggested that somehow there was a link to be found between the success of Irish provinces and the fact that the ERC was based in Dublin.  The bulk of it amounted to mere innuendo, but it was there nonetheless and it was infuriating to say the least.

Now that the competition has been restructured thanks primarily to an initiative from the English club’s lobby group, I’m more than aware that if I draw attention to a refereeing decision I felt simultaneously denied an Irish province and helped an English club, then I could be falling into the same trap.

So just to ensure there is no misunderstanding...my position is that Romain Poite got this call wrong.  I don’t think there was a conspiracy, nor anything else underhand.  I don’t even have an overall beef with this particular official as others do.  I just think it was a catastrophic error and in my book everything that happens after it until the end of extra time is irrelevant as the time should not have been needed.

And the reason I feel the need to devote so much time from this writeup to the subject is that on paper it looks like Connacht somehow threw away a 7-point deficit and in my view that couldn’t be further from the truth.  Sure they made a few errors on the day but given they were up against a club with a much bigger budget & fan base, for a province with the least resources in the Irish system they not only did themselves proud but they deserved the victory which was just 22 seconds away.

To look at the decision in question (you can see it here)...with the clock running down skipper John Muldoon brought the ball into contact.  Just one, maybe two more clean phases and the game was won for the West.  Gloucester lock Tom Palmer makes the tackle but the visitors have plenty of men in support for the clear out.

Now before I continue, one of the reasons I went online to express my rage was that I was keen for someone to set me straight and point out how it could have been construed as penalty to Gloucester.  And sure enough t’internet didn’t let me down though not one explanation came from an English fan.

It could be said that Miah Nikora clears out after side entry.  It could also be said that as Poite contends, Muldoon did hold the ball for too long after the tackle.  And another suggestion was as Connacht scrum-half Ian Porter is demanding the penalty he is somehow making the ref more inclined NOT to award it.

Those are all indeed valid enough scenarios, though each can be refuted.  If the one about Porter is true then the ref made his call out of spite, which I very much doubt.  And both the side entry and the holding actions were actually caused by the fourth option and the one that I reckon is the most viable...that Palmer did not make a sufficient effort to roll away.

Poite’s contention was that Palmer was “trapped” and thus could not roll away.  A reasonable enough assertion I suppose when you view this incident in isolation but when you watched all 100 minutes of the action it most certainly was not a position to which he stuck.

I’m not even necessarily saying the penalty should have been given to Connacht.  Top of my list of referee actions would be to do absolutely nothing.  Context is everything in these situations and with the clock winding down and the margin seven or less the call has to be absolutely sure.

Take Nigel Owens when he pinged Racing against Sarries.  He WARNED them at the previous ruck yet they went and did the same infringement at the next one anyway.  He was left with no option.

Here, given the situation in the match and the precedent set by previous calls & non-calls, Monsieur Poite had numerous options, and in my book, he not only picked the wrong one but it was one at the very bottom of the pecking order.  And what’s more, to their immense credit, the commentators from BT Sport (aka PRL TV) agreed in their analysis - Conor O’Shea was far from alone in decrying the call.

OK, that’s enough on that.  Happy to engage with commenters in threads on social media, but no more from me on that issue in the writeup.  Time to harp on how well Connacht did to at least get to the brink of an historic victory.

It wasn’t exactly the best of starts from them.  All the talk in the previews, my own included, said how important it was for Pat Lam’s men to stay focused right from the off, after fluffing their lines from the kickoff they found themselves 0-7 down with barely two minutes on the clock courtesy of Ross Moriarty.

But as often is the case, despite such one-way traffic in the opening exchanges it’s hard to to tell how a game is going to go until you have seen both sides have some decent possession, and once Connacht did it was clear they were there to play.  And after a steal by Muldoon and a quick ship to John Cooney, the former Leinster scrum half had the pace to run sevens-style from half-way under the posts, albeit with an excellent support line run by his team-mate Robbie Henshaw.

So it was clear that we had quite a contest on our hands for the right to play Bordeaux-Begles next weekend, and with the help superb individual displays from Bundee Aki, Aly Muldowney and Denis Buckley as well as a great overall 15-man cohesion throughout the side, Connacht were able to stay a step ahead of the household names opposite them right up to the (very, very) bitter end.

I have left the most impressive names until last.  BT’s man of the match was outhalf Jack Carty and it’s true the overall tempo of the Connacht attack was due to his game management but for me it was a close run thing between himself and Matt Healy - I’ll probably never be allowed into a Galway pub again after saying this but despite all the back three talent at Leinster I wouldn’t mind seeing the former Lansdowne man sporting blue at the RDS on a regular basis.

And the two combined for easily the game’s best try (some will say it was May’s in extra time but don’t forget I’m in denial that any of that action took place).  With a Connachtman in the bin, Carty and Healy combined for a crossfield kick/catch/try that was made look so easy you’d swear it was Wilkinson and Habana for Toulon.

But in a moment of heartbreak to match Ireland’s against New Zealand at the Aviva in 2013, the penalty the awarding of which I will never again speak was placed in the corner and in the phases that followed the Cherry and Whites were able to find a gap for Prince William Bill Meakes to touch down.  Maybe we could have issues in how he found a gap through the absolutely physically and emotionally shattered Connacht D, but I reckon I already cashed in all of my call-questioning chips for this writeup.

Look...maybe I’m allowing myself to be a bit too one-eyed for this match, particularly as it involves a team other than my own.  I accept that.  But Pat Lam’s tenure in Galway has been a fascinating sub-plot in the overall Irish rugby story in recent times.  Since his arrival he has put his emphasis in getting his squad playing for the jersey and despite being essentially without the talents of Mils Muliaina he brought them to the brink of an amazing the result and in my view deserved to actually get it.

It was a defeat made even more disappointing by a similar controversy earlier in the season when the Cardiff Blues were allowed to carry on for about half an hour with a red clock to get a match-winning try which put a big dent in their chase for 6th place.

And as I have pointed out before, it’s not entirely a case of Connacht being innocent victims of mistaken calls.  They will know areas where they themselves have left Pro12 points behind throughout the campaign, and it’s true there were a few matches where they weren’t able to stay with their opposition for the full 80 minutes.

But I sincerely hope that to a man they hold their heads up high when it comes to this 100 minutes despite the fast it cruelly brought their season to a close with nothing to show for it.  You just can't help the feeling that it is they who are trapped in the lower echelons of European rugby, even if it is by fate rather than design.

Well done to Pat Lam, John Muldoon and everyone involved in the Connacht set up for a campaign where it can certainly be said they fronted up, rose up, and did their loyal fans proud.  Over the past few seasons they have not only shown the Pro12 but also some of the top clubs around the continent that they are a force to be reckoned with.

Finally, I hope I have given no indication that I bear Gloucester Rugby nor any of their fans any ill will after this result.  Best of luck to them next week against the French and indeed next season when despite generally underperforming on Sunday, they could well be pushing for the top half of the Premiership table. JLP.