This is the final post in a four-part series running over the weekend where I have looked at where each of the four proud provinces stands. First there was Ulster ahead of their Pro12 playoff semifinal, then my final thoughts on the departure of Matt O’Connor from Leinster, and then yesterday I previewed Munster’s clash with the Ospreys. 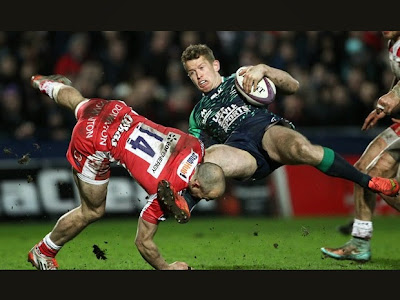 Last, but most certainly not least, we have Connacht, who line out at Kingsholm this afternoon for the right to host Bordeaux-Begles next week where the winner will qualify for next season’s Champions Cup.

As a Leinster fan it’s hard to talk positively about our western cousins without sounding incredibly patronising.  For me, one of the biggest compliments you can pay any sporting organisation on the rise is when you are able to offer some criticism, once of course it’s constructive.

Now there is no doubt that Pat Lam’s men have impressed at many stages throughout their Pro12 campaign.  They began losing just one out of their first six matches and over the course of the season got some notable home victories over Leinster, Munster and Scarlets.

But if your goal is to dine at the top table of European rugby you have to adjust your standards accordingly whatever your resources, and while I totally empathized with Connacht fans on Cardiff’s late, late try at the Arms Park which probably should never have happened, you can also argue that when the Blues were in Galway back in October the home side blew a 24-10 lead for a draw and this inability to consistently perform for the full 80 minutes may well have cost Connacht the 7 points they needed to catch the Scarlets on the table.

Another example of this was last weekend at home to the Ospreys, when much was made of the spirited comeback in the second half to not only earn a bonus point but deny the visitors one which would have given them a home semifinal.  But an even more telling example was when Connacht went to Kingsholm for the Challenge Cup quarterfinal.

Once again they came back in the second half to pull within seven points but in many ways the damage had already been done with two quick tries in the first period from Charlie Sharples and Bill Meakes respectively.

If Connacht are to have a hope today, and I’m not suggesting for a minute they don’t, they will have to be accurate in every aspect of the game and not afford the home side any easy chances, for on top of those two Glaws also have potential match-winners in James Hook and Jonny May.

That’s not to say the visitors themselves have no major threats.  Bundee Aki and Robbie Henshaw will no doubt have to pay serious mind to their defensive channels but between them they can make good things happen with the ball given half a chance.  Denis Buckley has been a revelation at prop this season as has lock Aly Muldowney.

But it’s the team effort they will need today more than anything.  Play the game in ten minute chunks, stay focused and keep the home crowd quiet.  The bookies have the cherry-and-whites by 9 points.  My heart tells me there will be another famous away win for Pat Lam to savour similar to that in Toulouse last season.  Unfortunately my head says there won’t, though it would be confident the spread would be beaten and the margin kept down to 4-6pts.

Here’s to my heart winning the day and Connacht both fronting up and rising up to give their home faithful the extra match at the sportsground they very much deserve.  You can be sure all Irish fans are fully behind them.  JLP

Gloucester v Connacht will be the subject of our Monday match writeup this week; check out for it around lunchtime.