TIme for part 3 of our mini-series on where the four proud provinces stand this weekend.

First up I previewed Glasgow v Ulster - I thought the home side would win but I certainly didn’t expect them to take so long to find their rythym going forward - unfortunately for the Ulstermen they couldn’t hold their focus for the entire 80 minutes and paid the price.  Much is being said about “that dive” by Niko Matawalu and as an isolated incident it was disgraceful but IMO you can’t draw a line from there to the result.

Then I penned my final piece on the tenure of Matt O’Connor as head coach of Leinster Rugby.  As the word “final” suggests, I have nothing more to say on it and hopefully a suitable replacement can be found well before the preseason.  I’d suspect the bulk of that work may have already been done, but we’ll no doubt know soon enough. 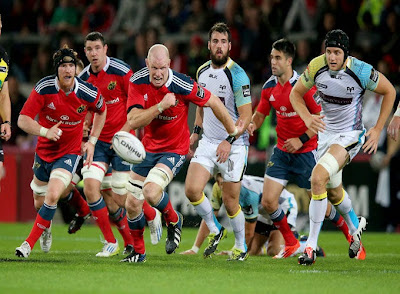 For this bout of harping I’d like to focus on Munster.  By their standards, failing to get out of their European pool constitutes a poor season but there are tons of mitigating circumstances, with the stinker of the pool they were in and it being the only the first year of “Axel-ball” uppermost amongst them.

Their Pro12 form has been a very different story, however.  It was a hiccup of a start with a loss to Embra at Thomond but in the 21 rounds that followed no team in the league had a better record and this of course includes an extremely emphatic double over Leinster.

Such consistency was achieved thanks to a cohesiveness among the side in general as well as top performances from the likes of CJ Stander and Keith Earls, and in recent weeks the return to action of Donncha Ryan has been a major boost for both province and country.

Arriving in Limerick to face them today are Those Pesky Ospreys as I call them.  I coined that term not as a negative on them, it’s just that despite not ever doing much in Europe they have a knack of putting together a solid second half to their seasons and have 4 Pro12 titles to prove it.

Despite the fact that no team in the league won more matches than they did, it only brought them a 3rd place finish and this could be down to a (relative) difficulty in scoring tries.  Over the 22 rounds they dotted down 15 fewer times than their opponents so it looks like they will have to go to Thomond Park with a view to thwarting their hosts going forward, which will be no easy task but they certainly have the talent especially in their pack with the likes of AWJ, Lydiate and Tipuric..

The bookies have Munster by five and while you can never rule out the most successful Welsh region I think the home side will at least double that spread today; I’m going for a 10-12 point margin.

Here’s to a great afternoon for the Munster faithful and if it’s even half as exciting as Scotstoun last night we’re in for a treat. JLP

Tomorrow we’ll have the final part in the series as we look ahead to Connacht’s trip to Kingsholm, which incidentally will be the subject of our Monday match writeup this week.
at May 23, 2015