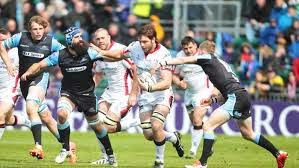 Now seems to be a good time to check in on each of the four proud provinces and see where they stand as the 2014/15 season draws to a close, and so between today and tomorrow I’ll be harpin on each province one by and checking out where they stand.

For my Leinster of course it will revolve around the head coaching job, while the other three are all involved in knockout rugby this weekend so I will take a look ahead to see how I feel they will get on -  first, Ulster.

The Leinster-less 2014/15 Pro12 playoffs kickoff tonight at Scotstoun as the Ulstermen hope Gregor Townsend’s side have a false sense of security after their comfortable victory last weekend.

I have no doubt that Neil Doak’s squad have the ability to pull off a result tonight.  No doubt at all.  They have players at key positions peaking at the right time of year like Paddy Jackson, Craig Gilroy and particularly Iain Henderson and if they can replicate that form this week and next even this Leinster blogger will have to concede they will be snapping at the heels of those above them in the World Cup pecking order.

But it will take more than individual displays to get past this Glasgow side.  What has made them perennial playoff contenders in recent years has been their cohesion from 1 to 15 when they have the ball, which makes defending extremely difficult.  If you commit numbers to the breakdown they have multiple offload options and normally pick the most effective one.  If you keep men away they’ll just take the ball up and barrel through the gaps.

So what Ulster are going to need tonight is a defence somewhere up around the levels they showed on that incredible Heineken Cup visit to Thomond Park back in 2012p, when they never went to their bench and made about a gagillion tackles.  It’s a big ask, but just in case a place in the final isn’t enough of a carrot, there’s the fact that it’s at Kingspan so I certainly wouldn’t rule it out.

Another thing Rory Best & co need to work on is discipline.  Of course we can dispute how the “Fair Play League” is organised but the fact remains Ulster were rock bottom of it.  They need to get on the right side of the ref while at the same time get on the wrong side of Niko Matawalu enough to ensure that when he does something unexpected like we all expect, it helps rather than hurts them.

The bookies are being surprisingly cautious with this fixture, tipping the home side by just 3 points, which definitely gives Ulster every chance.  While my heart is telling me they can both get on top early and stay there, my head is telling me the Warriors’ determination to get back to a final coupled with perhaps the bounce of the ball going against the Irish province will result in a home win by about 6-8pts.

I mean every word of it when I say that I hope I am horribly wrong and we have a rare playoff away win tonight.  As I’m watching I will definitely be standing up for the Ulstermen.  JLP