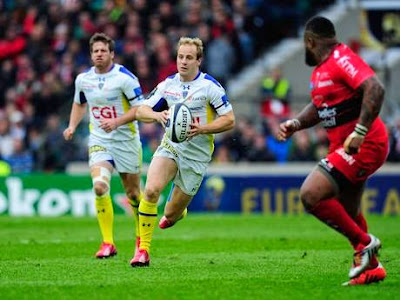 Britain will decide this week who occupies Number 10 in London - unfortunately for Clérmont a similar decision was taken away from them as outhalf Brock James was ruled out in the warmup.
However, there was plenty of democracy surrounding the choices their players had to make throughout the match, and in many cases they put the x in the wrong box.  This, more than the complaints many seem to have about a perceived disregard for test rugby shown by Mourad Boudjellal and his deep pockets, won the day for Toulon.

I certainly can’t fault English commentators for focusing on Nick Abendanon and Steffon Armitage with their coverage, nor could I fault the Welsh for honing in on the presence of Leigh Halfpenny and Jonathan Davies.  Of course had my beloved Leinster come out on top in our semi, this writeup would be mostly about them, and had Racing Métro made the final, I would probably make it about Messrs Sexton & O’Gara.

But the challenge for such one-eyed observations is to focus on both the good and the bad, and impressive and all as Abendanon’s try was that brought Clérmont back into this match in the second half, it was his decision not to hoof the ball into row Z at the end of the first which, for me anyway, provided the most significant turning point of this contest and without the 7 points that followed the new trophy would probably have a different name on it today.

Despite the injury setback before kickoff, Clérmont hit the ground running at Twickenham and had the reigning champs pinned back in their own half for most of the first quarter.  Trouble is though, not only did they merely have a 6-3 lead to show for all the early pressure, the questionable decision-making was already happening as early as the first 4th minute as Camille Lopez saw fit to try a drop-goal from a ridiculous attacking position with no penalty advantage coming.

Now it wasn’t merely poor choices by Les Jaunards that was keeping their score down - I thought a few decisions by the officials weren’t helping.  A block by Chris Masoe was ruled accidental when it certainly looked to be anything but.  Later Bryan Habana cleaned out Parra taking the ball from the base and while the pen was awarded, there was a case for yellow or at least a warning.  And when Parra took the quick tap a couple of metres inside the Toulon half, he was clearly tackled by Juan Smith ahead of the restart line and thus it should have been another penalty.

So all of the above marginal decisions definitely take the edge off the one that worked in Clérmont’s favour when they got the game’s opening try.  Toulon made a mistake or two themselves on the day, not least when Sebastien Tillous-Bourde attempted a box kick without blockers - Parra was probably a fraction offside when he charged it down but it wasn’t seen and it went straight to Wesley Fofana who’s pace saw him home.

Again on the theme of questionable Clérmont decisions, perhaps I’m being a bit harsh but I reckon a player of Fofana’s calibre would have been able to cut inside and give his kicker an easier conversion - instead he went for the dive in the corner and given how Lopez celebrated his relatively-easy opening penalties from the tee, the extra two in this case were beyond him.

Yet having opened up a two-score lead, ASM were now in the “will they choke (again)?” zone, and how sportsmen handle this pressure is what separates perennial champions from perennial also-rans.  Right from the kickoff after the try, what should have been a routine take by Sebastien Vahaamahina was completely misjudged and as a result Toulon were able to seize the initiative which allowed them to claw back six points of the deficit, and it would have been nine without a rare placekick miss from Leigh Halfpenny.

But as the clock read 39:56 and his side up by two, Parra took the ball from the base of a ruck and passed it to Camille Lopez.  At halftime Jonny Wilkinson defended the out-half’s decision to kick long but I’m not so sure the 10 was totally at fault.  Game clock awareness is a key facet of the game at this level and I believe if Parra puts in that pass he must believe the clock was red, which it wasn’t, and the aimlessness of the resulting kick seemed to come from Lopez not expecting it.

So as Matt Giteau put up a garryowen in reply, surely the best he could have hoped for was the receiver fumbling somehow giving his side half a chance.  By the time Nick Abendanon caught it outside his own 22, the clock clearly read 40:11.  The key words there are “outside his own 22”.  If he HAD to kick, surely it had to be long.  But the chip he went for conceded way too much control of the situation and the resulting bounce of the ball went against him.

Now...it did take some extra special rugby from the Toulon players to get from the retrieval of the chip to Bastareaud’s try, but the fact remains they should not have had the opportunity.  Maybe it’s a tad simplistic to compare those seven points to the six-point margin of the final score, but it was still as much a hammer-blow to Clérmont’s confidence going into the dressing room as it was a boost to Toulon’s.

RCT started the second half well pressure-wise, but so did Clérmont defensively.  There were nervy opening exchanges to the period and the 5-point margin meant the next score was always going to be crucial.

I guess we’ll never know what possessed winger Noa Nakaitaci to fling the ball away from Bryan Habana after he fumbled it into touch turning a lineout into a penalty but the fact remains it was yet another basic error by ASM of which Halfpenny was happy to avail; suddenly the 8-point margin was enjoyed by Toulon, and given how stubborn their defence was on the day, it was always going to be an uphill battle to claw it back.

Yes, Clérmont did manage two tries on the day just like their opposition, but you have to look beyond the numbers and analyse how they came about to see the difference in the two sides on the day.  Franck Azéma’s men have played some awesome rugby in this year’s competition, especially in the quarterfinal against the Saints, but on this occasion they needed to capitalise on Toulon errors for scores.

I described the Fofana try earlier and for their second, which is hailed as being genius by Abendanon for his chip to himself paying off this time, the opportunity was presented only after Toulon won the ball back in their own 22 before a Bryan Habana clearance went awry straight to the former Bath full-back.

And Clermont’s woes at restarts continued when immediately after that try, Toulon recovered and quick thinking by Ali Williams nearly led to a 5-pointer for himself which, while it was ruled out by the TMO, perhaps should have stood.

RCT, on the other hand, showed a great team effort for their first try before the break, while for their second, it was the deserved man-of-the-match Drew Mitchell who found a perfect line 10m into the opposition’s half to break 6 tackles as well as Clérmont hearts for the decisive score.

But as Halfpenny missed the conversion, the lead was still six and the contest not over.  And throughout the second half in particular, solid and all as the Toulon defence was, Nigel Owens was ignoring the efforts of Steffon Armitage on several occasions in his attempts to force turnovers, so more often than not Clérmont would retain possession.

And when you need 7 points and find it so hard to counter your opposition’s line speed, one of the best things that can happen for you is a penalty around half-way which means with a decent lineout-maul you can negate the defence.  With Jono Gibbes orchestrating the Clérmont pack these days, you could definitely see them doing just that as Owens awarded a pen from a scrum with the clock at 77m.

Too bad they never got the chance though, as sub outhalf Mike Delany got his kick from the hand totally wrong and couldn’t even find touch allowing for Toulon to clear.  That was your ball game.  They had some more possessions in those final couple of minutes but that D was too strong and in a dark way it was fitting that Lopez opting for a cross-field kick that was never on finished the match.

Afterwards the debate raged on the English-speaking social media over whether or not it’s fair that a club like Toulon can buy their way to three European crowns.  Personally I can’t begrudge a team once they are staying within the rules, though when Leinster won three titles it seemed to be the catalyst for change so maybe this should be as well.

However, what both the semifinal and final of this inaugural Rugby Champions Cup has shown is that for all the money that has gone into putting this side of “galacticos” together, they are still very much beatable.  We just need someone to step up and actually do it to them rather than to themselves as I feel Clérmont did on Saturday.

But congratulations must go where they are due.  Toulon are worthy winners, they are the first to win the European crown three years on the bounce and they are certainly well up there with Toulouse and Leinster as the great multiple champions.

If we are to have any chance to add a fourth star to our blue  jerseys we will have to find a way past them.  What’s more, something in my bones tells me we will get two opportunities to do that in the pool phase next season.  JLP
at May 04, 2015