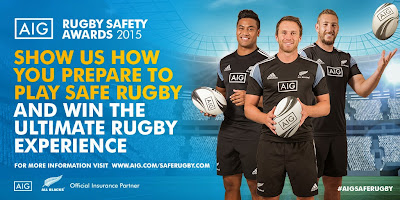 AIG’s Rugby Safety Awards encourage players and fans at all levels to share rugby safety tips via social media, to champion the importance of preparation in improving safety and reducing the risk of injury.

Speaking about the awards, Daniel Glantz, Global Head of Sponsorship at AIG commented,

“We are committed to growing rugby’s presence, and player safety is fundamental to the development of the sport. Similar to risk mitigation in insurance, preparation and safety awareness is crucial to reducing injury risk in rugby.”

“Rugby is a contact sport. Everyone accepts that bumps and bruises are part and parcel of the game, but equally we want to reassure parents and players both young and old, that we are working very hard with our coaches to make rugby as safe as possible. Programmes like the AIG Rugby Safety Awards are a great way to raise awareness and help rugby become safer.”

AIG is giving rugby players worldwide the chance to win the ultimate rugby experience by posting a photo showing how they prepare to play safe rugby. Entries can be submitted via Twitter or Instagram using the hashtag #AIGSafeRugby.

The winner will travel to London this September to meet players from the current All Blacks squad and see the team in action. The public have until Friday 26 June 2015 to enter. To view the entries go to www.aig.com/saferugby. The winner and three runners up will be announced in July. 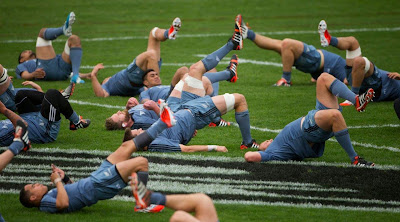