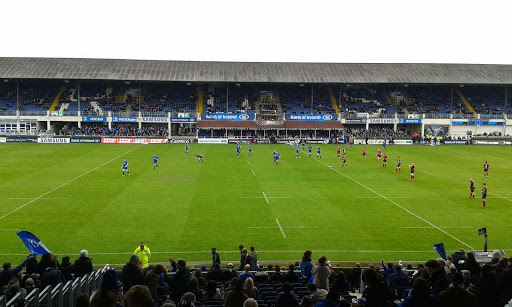 It was very much a mixed weekend for Leinster & Ireland rugby fans.

The national team put away a top nation without scoring a try, while at the RDS, Leinster saw a long unbeaten run at the arena ended by an unfancied side with only a succession of injuries to offer as anything close to an excuse.

Here’s what Joe Schmidt had to say afterwards…

"Yeah we are gutted... The injuries are continuing to mount...we really are struggling for numbers...The result is really tough to take.  I thought we played a lot of good footie to be honest and I know it doesn't look good on the scoreboard, but there was a lot of frustration around the ruck area and I am pretty disappointed."

Sorry...did I not mention I was talking about the weekend of September 17, 2011?

Most rugby fans remember Ireland’s famous victory over the Wallabies in Auckland...but I’d wager only Glasgow supporters have retained memories of their Pro12 round 3 victory in Dublin later that same day.  And they weren’t the Warriors of today who are serious Pro12 title contenders either...at kickoff they had lost their previous two league matches and finished second from bottom the previous season.

So I suppose what I’m saying is that we have been here before.  Does this mean we’re destined to go on to win the European title as Joe’s Leinster did back then?  Er, well, I won’t rule it out, but let’s just say it’s more likely to mean that I’m looking for reasons to stall writing about this match!!!

At least I can see the screen of my laptop as I’m typing - I thought I’d have problems given all the egg on my face after predicting a 25-point victory in my preview!  I snapped the lead photo as Leinster took to the field...a happier time when I still thought the margin was do-able. But I still stand behind my reasoning behind the forecast.

Given we’re league champions and the strength of squad we were able to put out on the park despite it being a Six Nations weekend, there really can be no excuses for this result.

But as is the norm with shock results like this one, it would be unfair to perform the autopsy on Goliath without first praising David.  The Dragons were set up exactly as they should given the odds stacked against them, and they ticked all the boxes in their column.

When a try-scoring chance came, they took it.  When important tackles needed to be made, they made them, with flankers Nic Cudd and James Landman to the fore in that department.  And when 10-minute sin-binnings needed to be handled, they handled them - in fact their lone try from centre Pat Leach actually came when they were a man down.

This was a victory for them on a par with Connacht’s in Toulouse last season and I certainly don’t wish to take anything from them as they celebrate.  But this is a Leinster site, and my primary concern is what went wrong on our side and whether or not it means we have any hope for silverware as we get closer to the business end of the season.

As the match wasn’t on TV I didn’t get my usual chance to watch the action a second time to get the writeup set in my head.  What I do have, however, is my own depiction of the action from the press box as I did a “liveblog” of the game, something I really enjoyed (despite the result!) and might continue to do at future matches even if they are on the box.

So going back over my notes I was able to put the incidents during the match into 5 categories - “Good Leinster Play”, “Good Dragons Play”, “Referee decisions”, “Leinster injuries” and “Times Leinster lost possession”.  Can you guess which list received the most entries?

Spoiler alert - it was the last one.

Now - we can offer some mitigating circumstances, not least of which was the chopping and changing of our lineup on the back of not one, not two, but THREE head injuries all in the early stages.  3m Strauss off, Dundon on. 7m Dundon off, Strauss on. 11m Denton & Reid off, McCarthy & Fitzgerald on.   Then on 25m Strauss receives another blow to the head and has to depart for good.  Hopefully they will return to action soon but of course only after the correct protocols.

Remember...these are not excuses, just facts which didn’t help our cause.  And the biggest hindrance for me was yet another early change to our key centre combination, something that has happened all too often to Leinster this season and cannot be ignored.

Then we had the officiating.  No,  I’m not blaming referee Ben Whitehouse for our loss either but while I will admit my goggles are a tad blue he did make a couple of calls that seemed strange, like a maul which the Leinster D held up for an eternity only for him to award the scrum to the visitors, and in the final stages a van der Flier jackle seemed perfectly legal yet he was pinged allowing Prydie to slot what turned out to be the winning points.

But what didn’t help him doing his job was the lack of a TMO.  The Pro12 may be well behind the Champions Cup in terms of standard but it is still a senior, season-long, top European tournament and should be treated as such.   I really don’t think it’s too much to expect for every match to be guaranteed a video official even if the TV cameras aren’t present.

On this occasion a TMO could have checked when Dave Kearney kicked the ball forward in the early stages only to be hauled down by Pat Leach, who not long afterwards scored a try.  He could have checked an incident in the second half when Fergus McFadden seemed to be taken in the air.  And, to be fair, he would have probably ruled out Leinster’s try as the pass from Ben Te’o to John Cooney seemed to be forward before the sub scrumhalf kicked it ahead for Kearney to touch down.

Believe it or not, it wasn’t all bad for Leinster.  There were a few bright spots, like strong heaves from the scrum, neat offloading especially from Luke Fitzgerald, and a couple of line breaks by Ben Te’o.

But unfortunately it was the rugby league convert who’s name features most in my list of times Leinster lost possession.  I counted four knockons altogether, and three of them in the final ten minutes as we chased the score we needed to snatch victory.  I’m not highlighting this to put him down nor to suggest he doesn’t have a future...I’m merely stating the facts.  I’m all for continuing with the experiment but on this evidence he will need a lot of game time to adjust.

And we certainly cannot lay all the blame for our lack of progress at his feet.  There were others who dropped the ball at different stages, our tactical kicking was woefully inaccurate at times, and as much as I dislike the cliché there really did seem to be a lack of overall leadership on the park.

We played badly, we lost a game we should have won, and there’s no sugar coating it.

But does that mean we must give up and write off the season?  Absolutely not.

My demands for a comprehensive victory will be no different on Friday night as Zebre come to town.  It will have been a punishing five-day turnaround for both teams but the Italians have to travel and they have just been thumped at home by Glasgow.

As a reward for sticking with this difficult writeup I can give you an exclusive “sneak peek” of my prediction (doesn’t that make you feel special?) - it’s going to be for another 25-point winning margin.

It’s up to Matt & the boys to get the work done during the week to ensure I don’t have egg on my face again.  #COYBIB JLP 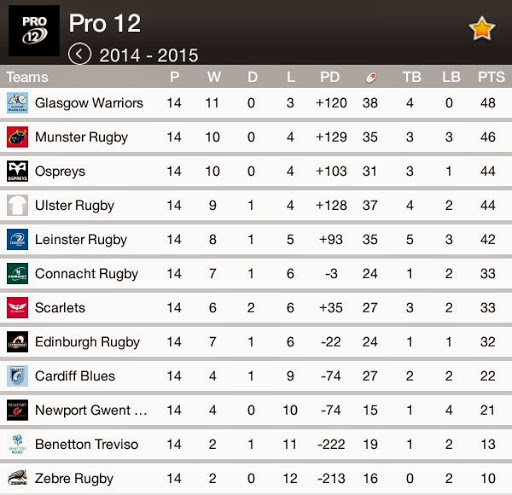