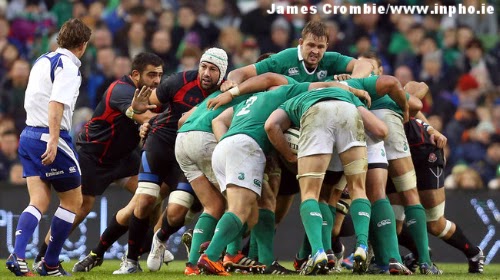 "Daddy, why did that man say they'll be going for the juggler now?"

I'm not sure my 5-year-old is quite ready to learn the Laws of Rugby Union but it probably would have been easier for me to explain the breakdown than what Donal Lenihan actually said as the floodgates finally started to open for Ireland.  At least the little fellow is now willing to let me re-watch the big matches at a decent hour!

Anyways, down to business...here are three reasons why we're going with "Three" as our headline this week....

I think we can safely say that Ireland's matchday 23 at kickoff time yesterday will never, ever play together again.

And what's more, while it was by no means a perfect display from the men in green despite the scoreline, pretty much everything you could single out as a negative stemmed from the fact that the key combinations around the park simply weren't used to each other.

Also we need to consider the mindset of the Georgian lineup.  Notice how referee JP Doyle (representing the RFU though formerly of Terenure College by the way...) spoke mostly in French to their players?  This is because many of them play in the Top14.

So given this trip to Dublin for them was sandwiched in between two home matches in Tblisi against Tonga and Japan respectively, you could forgive them for adopting an "away-day" mentality similar to that you normally get from French clubs.

Plus there was the relative inexperience in their squad when it came to this level of Test.  When we persisted with the ground game down the middle they couldn't resist shipping penalty after penalty, and at one point they declined a scrum advantage which they probably should have taken to help run out the clock on their first sin bin.  Instead they played on and shortly after Strauss was falling over the line for our second try.

It really looks like I'm trying to knock the stuffing out of a 42-point Irish victory, doesn't it?  Well maybe I am, but again I refer you to point number 1 earlier in the post.

The best way to look back on this match is to point to individual performances, because while often the combinations didn't quite hit it off, it certainly wasn't for the want of commitment on behalf of the players, and this was the most impressive thing I took from the Irish display.

FELIX JONES - Back to the form which had him on the cusp of Ireland's RWC2011 squad before a cruelly-timed injury cost him his place.  Will never unseat a fit Rob Kearney from the starting lineup but has done more than enough (and by doing much more than scoring two tries) to earn a start against Canada and/or Romania in our pool next autumn.

CRAIG GILROY - Thought he was quiet when watching live but looked a hell of a lot better the second time.  Had our gameplan been to simply beat this Georgian team he could have had a hat-trick as they seem to be most vulnerable out wide but he didn't let that frustrate him and he stuck to his "Schmidt-style-winger" task very well I thought.  Led our "metres gained" stats.

DARREN CAVE & GORDON DARCY -  Karchavara, Georgia's number 13, made more tackles (11) than our two centres put together.  Sharikadze, their number 12, made twice as many tackles as Karchavara.  It was a quiet afternoon for our two and the ease of the lone Georgian try certainly won't be lost on them.  But as I said earlier, there were Irish combinations which we probably won't ever see again and this was definitely one of them.

SIMON ZEBO - Got a bit more ball than last week, but didn't do much more with it.  Looked as though his mind went blank from everything he was told at Carton House about what to do and simply ploughed forward every time.  For him not to start next week would probably spell the end of his World Cup hopes and I think on this performance I'd be inclined to go with Gilroy next week, though some have suggested Felix Jones could be a surprise wing option.

IAN MADIGAN - Given the Georgian centre channel was shut tight all day, the "Mad-Dog" had to either run at his opposite number or quickly send long passes out wide.  Luckily for Ireland, both are well within his wheel-house.  One fizzed pass to his right was particularly sublime, but overall it was his comfort in the position that stood out the most.  19 points, 5 defenders beaten, 10 tackles all impressive stats.  The question of whether or not they impressed his provincial coach is one for anther day...

EOIN REDDAN - Great nod to give him the captaincy for the day and though Ireland didn't hop on the try-scoring band-wagon until the 2nd half, the half-back pairing were certainly doing everything they could to get us there.  These two have most certainly done enough to at least earn bench spots for next week, if not the 2015 Six Nations as well.

DAVID KILCOYNE - Certainly can't fault him for his attitude!  Great to see someone play with such drive and commitment from start to finish, and deserved to get the seal-breaking try. That's not to say I'd knock him up the pecking order ahead of McGrath and a fit Healy, mind you (call that provincially biased all you want but I consider it a fact-based opinion) but he most certainly can play a key role off the bench against the Wallabies.

RICHARDT STRAUSS - I reckon Cronin with his ball carrying just about gets the nod to start next week but Mighty Mauss definitely has a knack of popping up at key moments and getting important work done.  Scoring the second try was definitely one of those things but he contributes in several areas and knows his way around the breakdown.

MIKE ROSS - Since the Georgian language probably has about fifty different words for "prop", it was never going to be an easy outing even for our "can't do without" tight-head.  Shipped a pen or two more than he'd like but the game time was still valuable for him and I seem to recall a couple of decent carries as well.

DAVE FOLEY - Many tweeters found it hard to resist pointing out that it was a legendary Munster lock who made the decision but that's a bit unfair on Dave.  Trusted not only with calling the lineouts (where we lost just 1 from 19) but also the responsibility of being the "carrying" lock, he did both tasks with aplomb and earned the gong.

MIKE McCARTHY - always puts himself about at the breakdown with his "unseen work" and with seasoned lineout callers O'Connell & Toner probably starting next week, I'm wondering if Mike will keep his spot on the bench next week despite being out shone by his fellow lock on the day.

DOMINIC RYAN - OK first things first - the stamp.  On first look it seems to be a red card offence all day long.  But when you see how it transpired, there's no way Vito Kolelishvili could have intended what he did - in fact, if anything it seemed like he was trying to diffuse a potentially heated situation involving other players.  Wouldn't have killed JP to have another look at it, mind. The stud to Dom's eye was merely clumsy more than anything, but the Leinster flanker was still very lucky to be able to see out the 80 minutes.  Up against a pesky Georgian back fow I reckon he applied himself rather well.

TOMMY O'DONNELL - I think Tommy did enough to keep himself ahead of Ryan in Schmidt's pecking order and make the bench next week.  11 tackles, 11 carries, made for Schmidt-ball.

ROBBIE DIACK - Assuming nobody will ever unseat Jamie from the 8 jumper, I'm not so sure the back-up number 8s were played in the correct order on the day.  Sure, Robbie was a great lineout option with his 7 takes but I still think Robin Copeland would have not only had similar numbers in that area but also been put to better use about the park.

Sean Cronin - His part in the Felix Jones try which was the pick of the bunch cannot be overstated.
Jack McGrath - not used, needed for next week
Rodney Ah You - Didn't have the best start to his cameo with a forward pass and a high tackle but he certainly didn't shirk from carrying it to the gainline and beyond.
Devin Toner - brief cameo, not sure he was even needed
Robin Copeland - as I said, might have him ahead of Diack
Kieran Marmion - Definitely need to keep him around but our test 9s are still Murray & Reddan for now as far as I'm concerned
Ian Keatley - Deserved his cap, played role in 2nd Jones try along with Copeland, Marmion & Cronin.
Stuart Olding - loved the grin when he knew his pinpoint line had earned him his first test try with another 10 metres still to run!  Definitely showed the promise that got him this first cap and it should lead to many more.

So all told, a solid outing for what was essentially a Wolfhounds selection.  As I said in my post-full-time tweet...


If you want a good moan you're bound to find something in Irish display but IMO pts spread beaten & 6 day Aus turnaround minded. Happy out.
— Harpin' On Rugby (@HarpinOnRugby) November 16, 2014

From now until the World Cup, Joe Schmidt just has the Wallabies, the 2015 Six Nations, and some August warmups by way of match time for his troops.

He may be saying that the third place ranking thing is a "distraction", but it's not like that's the only thing for media both social and mainstream to harp on between now and next Sunday.  Besides...he doesn't strike me as the type of coach to let that kind of thing bother him.

We now know there are at least two full squads of players ready, willing and able to put on that Ireland jersey.  And hopefully they in turn know that there's an army of loyal fans who will be right behind them next week as they look to make it three wins out of three this November.