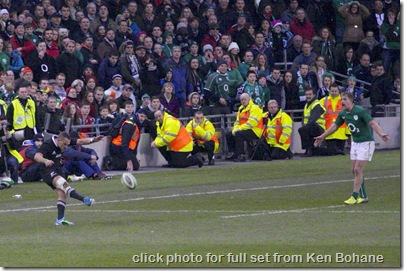 To read some of the commentary before this match you’d swear the biggest problem in Irish rugby was the music they played in the Aviva Stadium during matches.

To read some of the commentary after it, you’d swear the biggest problem in Irish rugby was to do with the way we are supposedly happy with “moral” victories rather than actual ones.

When you read my commentary, hopefully you will understand what I feel is the biggest problem in Irish rugby - blatant parochialism from broadcasters & fans alike whenever the boys in green take to the field.

Sure, Jonny Sexton should have made that 73rd min place kick to create an 8-point margin.

And sure, we let them get from deep inside their own half to snatch an improbable (even for the best team in the world) triumph from the jaws of defeat.

But those who see only the negativity in the performance are clearly choosing to do so, and as they desperately clutch at straw men to criticise, they do a grave disservice to the real Irish fans from all four provinces who shouldn’t be afraid to display their real emotions which quite rightly fall somewhere between disappointment and pride. If I thought the tweet on the right was just an isolated example of the reaction I’m talking about I wouldn’t draw attention to it, but the sentiment was so commonplace around twitter, Journal.ie and all the usual areas of online commentary I feel I must.  And note how even though it’s an Irish tweeter, it still says “They” lost.

Have people forgotten the scoreline the last time Ireland played the All Blacks?

As soon as the matchday 23 was announced there was extremely lazy analysis all throughout the Irish media, be it broadcast, print or social - I call it lazy because it took a very “safe” critical position on account of it being a Leinster-heavy selection, safe because with the All Blacks being 20-point favourites it would be then easy to draw the knives out should that margin have happened.

Well, it didn’t happen, so those people know what they can do with their knives.

Sorry for harping on like that, but I do feel it is a problem that real Irish fans need to highlight before we go any further.   And if you think I’m making this defence simply because I’m a Leinster fan then I reckon you may be part of the problem, as I defended Declan Kidney all the way through the 2010 & 2011 Six Nations right up to the RWC2011 quarterfinal against Wales.  Yes, I know many Leinster fans were biased against him when he was in charge but I certainly wasn’t one of them.

Now…to what actually happened on Sunday.  I have tried to break it down into some key components as well as the actual match progress itself.

FIRST QUARTER - Irish blitzkreig.  Brilliant from the off.  Manic to a man going forward, tenacious yet focused in defence when the All Blacks had the ball.  We had to come up with something, it had to happen in the first quarter, it was a job well done.  It wasn’t that we committed numbers to the breakdown, it was that whoever did get involved was given full license to behave like the Tasmanian devil and somehow from Best to D’Arcy to O’Driscoll we managed to do it again and again legally and thwart the opposition from establishing themselves offensively. 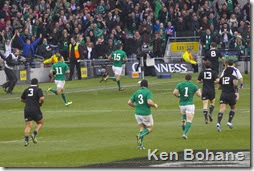 I’m not so sure the success going forward was part of the plan.  In our wildest dreams I don’t think we could have expected to be 19-0 up at the end of the first quarter, but the confidence we had in ourselves without the ball managed to be translated into success with it and offloads were sticking, gain lines were being consistently broken and thanks to Rob Kearney’s jets, a turnover on our own 22 was being turned into a try.  With the first two scores coming from Murray and Best, the boys were even spreading the tries around the provinces for those who gave a damn about such things.

SECOND QUARTER - On the few occasions the All Blacks did have the ball in the first half it was clear Aaron Cruden fancied his team’s chances down our right wing.  So in the lead up to their opening try I’m not entirely sure why Tommy Bowe found himself over on our left along with Dave Kearney.  This left an overlap out wide and though it needed a pinpoint grubber to make it work, Cruden supplied it and Savea was over.

THIRD QUARTER - All the copy is about what happened in the final minutes…I actually think we lost it in the third quarter.  Just one score in that 20-minute period could have killed them off but I counted up to a dozen times we gave possession back to them whether it was a breakdown penalty, a knockon, or the biggest sin of all, Devin Toner’s needless block on Wyatt Crockett which turned a chance to clear from our 22 into their opening score of the period and brought them within the crucial 2 converted tries.

See how I’m acknowledging that we did things wrong?  Sorry if that doesn’t suit anyone’s agenda that I’m making excuses!

FINAL QUARTER - I really thought Nigel Owens was favouring us in the first half, but if he was, he made up for it in the lead up to the Ben Franks try as I thought on more than one breakdown New Zealand could have been done for sealing off.

But we can only properly criticise those things that we can control, and although it is easy to single out the place kick Sexton pushed wide late on, for me he needs to be in the dock more for his decision to go for the crossfield kick on 67m.

It was pretty much our first time with decent territory in the second half and we merely needed to keep it simple and eat up the clock…not only was the kick inaccurate, it brought Beauden Barrett into the game and he was phenomenal in the closing stages.

Another decision I felt we got wrong was after Ma’a Nonu knocked on in the 77th minute.  A scrum at midfield could have killed even more time and THEN we could have possibly kicked for the territory.

BENCH CONTRIBUTIONS - Mostly top notch from both sides. We had to go to ours a lot earlier and Rory Best was remarkably unlucky as he was playing a blinder, but still Cronin had been doing well in his absence. BOD didn’t fare much better in the luck stakes but on a side note it was good to see the concussion laws being applied.

OH YEAH, ALMOST FORGOT - OUR OPPOSITION! - Only one other team in 2013 has held the All Blacks to 24 points or less - and although France did it twice, in their three-test series they only mustered as many points themselves altogether as we did yesterday in one match.

But do I REALLY need to provide that context? This is the number one team on the planet.  If you think their comeback was all about our slipping up and nothing about their quality then I don’t know what to say to you.  I especially have to laugh at all the talk about having to play for “80 minutes”, not because it isn’t true, but because New Zealand actually needed more than 81 to beat us.

THE PRESS CONFERENCES - Now…when it comes to criticising the performance, there is one group of people who are more than welcome to do so…Joe Schmidt & his players.  Their language since full-time has been spot on.  Of course THEY shouldn’t be making any allowances, and they aren’t.  They are professional sportspeople and part of their job is being able to close out these contests.  It just doesn’t help when their own fans are kicking them while they’re obviously down.

THE FANS IN THE STADIUM - By and large did a great job creating an electric atmosphere - sure, it took an amazing first quarter display to get things going but everyone seems to be agreement it was a superb occasion despite the result.

I can’t say I was thrilled with the booing at the end though…it wasn’t quite at “Dan Parks Croke Park 2010” levels but still our players were at fault for jumping the gun for the conversion.  (Having said that - if you happen to know the rules of baseball, Cruden could easily have been called for a “balk”)

VERDICT ON GUINNESS SERIES - My report card for Ireland over these three matches shows a C-minus and a “must do better”.   Now that we know that after being together for just a few weeks, winning positions can be worked against the best teams in the world who have been together since August, we must now show that we can close them out.

HOW DO THINGS LOOK FOR THE FUTURE? - Now we’re bound to see the term “once off display” bandied about.  Yes, this is a problem we have had in the past, but for me, it’s unfair to talk about it now as our next match isn’t until February.  If we struggle for form against Scotland, then use it all you want but in the meantime, there’s nothing anyone can do about it.

Truth be told, though I was gutted at the end I was actually closer to tears when I thought we had this match won.  What an historic moment that would have been.

But I sure as hell won’t allow anyone to tell me it’s not ok to feel an element of pride in my team for turning what everyone thought would be a blow-out into a cup final and for their part in one of the most exciting test matches of the calendar year.

My Leinster jersey will be taken out of the wardrobe in time for next week, but you can be sure the green will be back well in time for the Six Nations, where I feel we are well poised to do some damage with absolutely the right man at the helm.  JLP