Time to meet our 4th and final blogger who will select their ideal Irish team throughout the season; this week, Ulster…

Click here for more on the feature, but basically the idea is to select an Ireland matchday 23 for a test to be played the following Saturday. 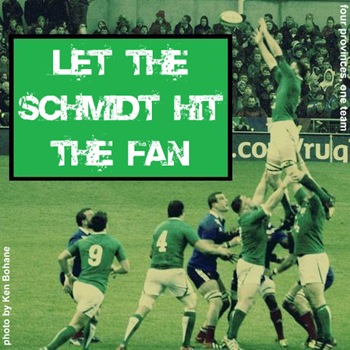 Task: - Pick an Ireland Team before the season has even kicked off … OK mission accepted. (I am writing this before the Rabo season has started as I am on holiday)

We have seen a little bit of rugby over the last few weeks, although this has been in preseason friendlies and in the case of the Irish provinces didn’t involve many of the senior players (including our roaring Lions) but hey I’ll give it a go.

I am going to tackle this as a clean slate i.e. forget about the performances of the players in the 6 Nations 2012 (some weren’t great) and focus on how they played in the weeks after ,including the Rabo , Heineken cup, Summer tour and Lions.

We have seen the end of an Ireland era which had some highs (Grand slam, beating Australia in RWC) but quite a few frustrating lows. I hope that the Autumn internationals will see some young guys getting more experience in the green jersey in the hope of building towards RWC 2015.

The number 17 shirt would be between Dave Kilcoyne and Tom Court, both are very capable of making an impact off the bench.

The number 16 shirt for me is Sean Cronin, He is a good pacey hooker and throws good arrows, and hopefully he can nail down the Leinster no 2 shirt this year

The number 18 shirt for me is between Stephen Archer, Jamie Hagan and Declan Fitzpatrick if he can stay fit. Both Hagan and Fitzpatrick need to get a few games in the no 3 shirt for their provinces which is tricky when you have Mike Ross and John Afoa ahead of you.

I picked Stephen Archer as I think he will be Munster’s first choice tight head this year due to injury to BJ Botha and his improvement over the last few years.

His absence in the 6 Nations was part of the reason I think our lineouts were a disaster at times.

The number 19 shirt for me is Iain Henderson, because of his versatility and ability to play both second row and back row.

I think many would say that the first choice backrow for Ireland when all are fit would be Ferris, O’Brien and Heaslip (some may disagree). But unfortunately Ferris hasn’t had the best of luck with injury over the last few seasons, which leaves the Number 6 jersey up for grabs. There are quite a few talented home grown back rowers in Ireland which makes the backrow selection one of the trickiest in the whole Ireland 23.

The number 20 shirt for me is Peter O’Mahony, although I would like to see Kevin McLaughlin get more of a chance of playing in the green jersey.

The number 21 shirt for me is Paul Marshall. I feel he hasn’t really been given a chance in green and maybe this is because he isn’t Ulster’s first choice no 9 but he is the type of player who can come off the bench for Ireland and change the pace of the game, he has done it many times for Ulster.

The number 22 shirt and replacement fly half for me is Ian Madigan, as much as I love Paddy Jackson ,I think Madigan has a little bit more experience and with Pienaar being away with South Africa , Jackson will hopefully gain more kicking experience and regain his confidence in the first part of the season. Madigan and Jackson will definitely be fighting it out for the No 10 shirt in the near future.

The number 23 shirt is a tricky one. Either of Fergus McFadden or Robbie Henshaw could claim it. I’m going to go with McFadden as he has more experience but Robbie is a star for the future.

@LauraJ2803 die hard Ulster fan ... Been an Ulster season ticket holder for 7 years ... Been there through the highs and the lows

Next week we go back to our Connacht blogger and see if the first two weeks of the season have affected his selection.