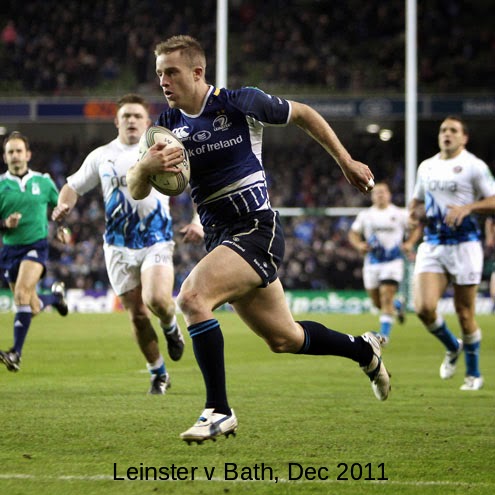 I suppose you can forgive the Irish for being a bit glass-half-empty these days.

All you hear in the news is words like “austerity” & “recession”, the euro is seemingly on the brink of armageddon and just a few short weeks before Christmas we've been hit with a budget that was never going to be good news.

Still – I can't quite get my head around those who find fault with this result. If it wasn't fans bemoaning the fact that Leinster lost the final quarter 21-7, it was the Indo picking up on one missed lineout. I even saw one comment on social media that harked back to the previous week's “transgressions” at the Rec.  I just don't know.

Another target for post-match bad-mouthing, of course, was referee Roman Poite, but you could be pretty sure that was always going to happen anyway so it doesn't really count.

Now – as for coach Joe Schmidt's reaction, well, I certainly can't blame HIM for being cautious. Clearly his squad are the form team in the tournament, yet after two more pool games in January he has to sit back and pray his top players get through the Six Nations unscathed.

But that's all the negativity out of the way for this piece. Truth be told, there really shouldn't be any at all. I mean, come on...52 points, seven tries, total domination when it mattered, all leaving us as number one seeds after four rounds.

I KNOW there's a long way to go, I KNOW the fat lady is yet to sing, and I KNOW all the other similar clichés. Just forgive me for saying I'm happy about Leinster's standing right now, ok?

The main source of the moaning from the Rec was that Leinster didn't finish their chances. And guess what, with our very first bout of possession on Saturday, we win a penalty, get a slice of luck with it hitting the post and falling perfectly for Devin Toner (you could say it was karma from Florian Fritz' try last April) but then once we have it under control we power over the line courtesy of Rob Kearney.

Then during the halftime break most fans were wondering if the bonus point try would be hard to get...well, again right from the kickoff, we got our answer, with a scintillating move from our own 22 that led to Luke's second five-pointer.

Man-of-the-match was a relatively easy choice. Sexton's improbable drop-goal, preceded by a bit of “will-I-Won't-I” before a stunning execution, was reminiscent of the one he got at Murrayfield in 2009 and showed just how comfortable he is playing in this great competition, as did his long pass to McFadden in that opening back line move.

Still, there's a case to be made for Devin Toner to get the bubbly from this match. Even though his height played a part in his taking that rebound he still needed composure to turn it into decent attacking ball, and if that's not enough composure for you, how about the cheeky dummy & offload that led to Luke's first try? All that on top of the quality lineout platforms he was providing surely must be making him close to undroppable.

Elsewhere around the park, it was hard to pick out individuals as it was such an accomplished team performance that took full advantage of the gulf between the two sides. I really doubt that if Bath had players like Lewis Moody available the outcome would have been any different.

The visitors did all they could to create opportunities but just could not find a way round the ultra-organised Leinster defence which, if you're still willing to put aside the final quarter, has been their most consistent area throughout the four matches.

Simply put, if Leinster can keep the injuries to a minimum (bit of concern about Cian Healy) then their chances of getting to another final could rest with the semifinal draw towards the end of January, and even if that goes against them, they're playing with a level of confidence that will make no team want to face them.

Once things for sure...when I'm looking for something to feel good about these days, I turn to the fact that my favourite province is literally number one in every sense possible. What happens in the future will happen. Right now, bravo Joe Schmidt & Leinster Rugby. JLP

Biggest stat for me from the weekend was that if the pool stages were to end after round 4, the top three quarterfinal seeds would be (in this order) Leinster, Munster & Ulster.

Even Connacht deserve a mention as they came so close to causing an upset at Kingsholm. They have definitely had their share of misfortune over their four matches and perhaps could have a better return than just two points, but I'm not sure if Eric Elwood would see it that way. Still, the competition was always going to be an experience for them and who's to say they won't get a second crack at it next year courtesy of one of the other provinces?

Ulster had a readily-definable task over the past two weeks, and you can't fault them for achieving it. Plus, the head-to-head between Leicester and Clermont fell perfectly for them. If Bryan McLaughlin's men can get five pool points from their remaining two matches they weill put themselves right in the mix for qualification.

And of course finally there was Munster, who did enough to complete the double over the Scarlets and become the tournament's only team with 100% record. With Northampton's destruction of Castres one can only assume the French will be in a similar mood when they come to Thomond in January, which means the pool should be well sewn up for Paul O'Connell & co when they visit a Franklin's Gardens that will hardly be welcoming in the final series.

While we're bigging up the top Irish provinces we mustn't forget the three “A” sides, all of whom got through to the knockout stages of the British & Irish Cup. I was raging I couldn't make Leinster's 24-all draw with London Welsh at Donnybrook when a last-gasp drop goal from Cathal Marsh could have won it, but still they got their home quarterfinal so it really was a perfect weekend all round.
at December 17, 2011