In the above video file you’ll see the final episode of HarpinOnRugby – The Vidcast. Contained within will be my analysis of the South Africa game plus my reasons for wrapping up the show. Thanks again to everyone who tuned in (both of you haha) and hopefully normal blogging service will resume next weekend.

THE RISE OF JONNY TEN

During the week I heard Brian O'Driscoll being interviewed and he referred to his Leinster team-mate Jonathan Sexton as "Sexto" and I thought : "OK, hang on...we can't accept this as his nickname, can we?"

And surely it's not homophobic of hot-blooded male Leinster fans to be reluctant to use any derivative of his surname to refer to him as "sexy"?

So via Twitter I set about coming up with something we could call this guy to set him apart from his peers, for if this debut performance is anything to go by, he's gonna need one in the years to come, and since he seems to be a master of his chosen position and wouldn't really fit in anywhere else on the park, "Jonny Ten" would seem to be the way to go.

Now before we all get TOO caught up in the hysteria and arrive at Declan Kidney's door DEMANDING the St Mary's lad start against the Springboks next week, I think we need to look at a few facts.

First, we must remember how much we should respect Kidney's ability to use his squad wisely. The trophies in his cupboard will more than attest to that.

Then, we must remember the wiggle room he has before basing too much faith in JT on this one performance. Don't forget...he was in very familiar surroundings with his Leinster buddies all around him not to mention it being in the RDS.

And finally, we must remember O'Gara's vast experience in "cup final" matches, which next weekend's clash with the Springboks certainly is. With Jonny Ten snapping at his heels for his jersey, it can only give him extra incentive, which can only be good for the squad.

Another reason I feel Kidney is going to plump for the Munster man is that D'Arcy didn't exactly have his finest outing in a green jersey at the RDS, which probably means that Paddy Wallace will wear 12 at Croker, which in turn would have the coach wanting Ronan passing it to him as he has done since their junior international days.

So let's not get TOO hysterical about Jonny Ten just yet, ok? Let's back the boys in green as they have a wonderful chance to go the entire calendar year unbeaten unlike any other major rugby nation.

But it certainly WAS a five-star debut for the lad, there's no denying it. Had a feeling he would've made kicks blindfolded from out on Anglesea Road, he was that good!

[Update Nov 13, 2013] Archive time here on HoR…the last time the Wallabies played Dublin was our first full post-Grand Slam outing.  This was the only rugby match Ireland failed to win in 2009, and it was also Cian Healy’s debut.  Australia went on to lose 8-9 in Murrayfield the following weekend. 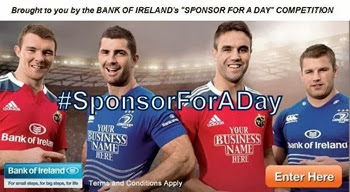 Is it really enough that we drew at Croke Park yesterday?
Is it really enough to use the excuse that we were “rusty”?
This was a match played in early November…can we use the same excuse when our first World Cup match kicks off on September 11, 2011 against (probably) Eddie O’Sullivan’s USA?
Of COURSE I was over the moon when Drico touched down under the posts to virtually guarantee a draw from this contest. But that can’t mean I can just forget what had gone before and not mention it.
And here’s the irony…when I’m writing posts like this I’m often giving out that we played it safe when we could have been adventurous. Well at the risk of being accused of never being happy, I think the opposite applied yesterday.
There’s a time and a place for adventure, and that time presented itself when we fell behind by seven points against the Wallabies. That time was NOT after winning our own lineout right outside our own 22 running the risk of putting the ball in a place where it could be intercepted.
That was an unnecessary gamble that had us seven points behind before we could have even gotten into our stride.
From there we steadied the ship somewhat and got the score to 6-10, and we’re awarded a penalty in front on the posts.
Again, not the time for a hopeful kick to Tommy Bowe, ROG! Take the easy three, get to within a point.
I calculate that those two decisions were crucial and resulted in a ten-point swing against us which if avoided could have us celebrating a victory today.
So let’s say that if anything was rusty on the day, it was our decision-making.
Now…to the good stuff. The Wallaby pack began strongly, but with no changes to our front five we were able to claw them back enough to be able to secure the ball which led to the equalising score at the death.
Of course nobody in said front five stood out more than the debutante, the magnificent Cian Healy.
And the Wallabies can’t use the excuse that they didn’t know the playbook on him, since their captain spent a good portion of last season with his face very close to the Clontarf-born prop’s backside in the Leinster scrum!!!
Also there was much to applaud in the back line, with even Paddy Wallace catching my attention for once.
Overall it was a good way to kick off the international season for Declan Kidney’s men, and although it could be better, I didn’t see too much that makes me doubt they’ll be ready to defend their Grand Slam title in the new year. JLP
at November 15, 2009