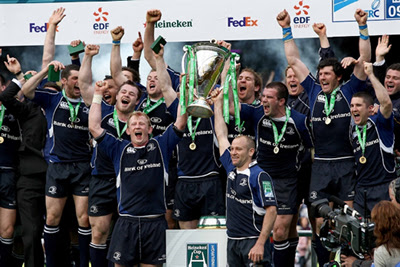 Early in the season, I’ll freely admit, I was the 23-year-old’s harshest critic – not because I doubted his ability, only his readiness for the highest stage. You won’t find a happier man than me to be proven wrong.

Sky’s commentators may have awarded the man-of-the-match honours to the mercurial Rocky Elsom, but I think if a real Irish network was covering the match as should have been the case, Sexton would have gotten the nod out of sheer relief that there seems to be a worthy successor to ROG ready to step up to the big occasion.

His kicking both from the hand and from the tee was nigh-on flawless. Even when he miskicked, as he did with the winning penalty, it seemed to go over. But also he showed a maturity in choice of options when receiving the ball from Whittaker that definitely wasn’t part of his game before Christmas, that’s for sure.

What can be said about his massive punt of a drop goal other than it was world-class??? I never thought I’d see anything to match Paul Warwick’s brace against the Ospreys in the quarterfinal but there we had one at Murrayfield.

My contention going into this match was that if we played like we did in Croke Park and Leicester matched their Twickenham showing from last week, we’d win comfortably. As it turned out, they kept their end of the bargain and although we were a notch or two below the semifinal display, we still had enough in reserve to stay ahead of our English opposition.

There was always going to be a spell where the Tigers got near our line, but in the end they needed an extra man on the park to cross over for a score. Dan Hipkiss’ strong burst through the middle got them into the danger zone, Stan Wright’s over-zealous tackle of Vesty got him sin-binned, and Shane Jennings had to be sacrificed which as always going to give them an edge in the loose which they capitalized on for Woods’ try.

Still, even 13-9 down at the break, I wasn’t too worried. Even when when Dupuy stretched it to 16-9. I knew we had a try in us, and that surely the bursts of speed from the likes of Rocky and Heaslip would pay dividends, and sure enough we got there and Jamie touched down and although the scores were now level we were back in the ascendancy.

Then, however, I started to worry, because our boys looked knackered from the 65th minute onwards. It was the end of a long season. Players were carrying the ball into tackles with little or no support and getting isolated which wasted good ball more than once.

Luckily, Leicester were tired as well and Sexton’s kick seemed to have been willed over the bar by the thousands of travelling Irish fans.

They may have gotten back at us late on if Vesty’s own kicking from the hand hadn’t become so poor. On three occassions he had chances to give his side possession in our 22 and each time he barely made the halfway line. That is food and drink to even a battle-weary Leinster defence which could smell their first major trophy.

And what a feeling it was when Nigel Owens' left arm was hoisted into the air after the 80 minutes were up to show we had a penalty and fittingly it was Sexton who ended the 2008/09 season in the best possible fashion.

One side note…I can’t say I’m a fan of this rubbing an opponent’s head when they’ve made a mistake, as Castrogiovanni did to Wright as he was walking towards the sin-bin. I hope that doesn’t become a regular feature in the sport.

But when all is said and done, my Leinster are the Champions of Europe, though our neighbours from the south will no doubt remind us that we’ll need another one to match them overall. Bring on next season so!!!
at May 24, 2009

The visiting Welshmen never really had a chance at the RDS on Friday night, did they?

Their season virtually over, facing a Leinster squad riding the crest of a wave after Croke Park and even having the audacity to put out their strongest available XV.

That has to have been a hat-tip to the fans, who were witnessing the last competitive game in Ballsbridge for the 2008/09 season, and not one of us that were clad in blue was disappointed.

I must admit the actual match itself was lost in my memory by the numerous pints of Guinness I had afterwards in various drinking establishments, but one thing I know for sure is that the boys thoroughly deserved their resounding victory and appeared hell-bent on giving us our money’s worth. As if, of course, they hadn’t already done that six days earlier…

By the way, my Croker 09 jersey was a huge success. I couldn’t even take a leak without someone saying something about it! To anyone who prints names and numbers on jerseys, I want a percentage of any profits you make since Friday on that particular combo!!!

I have a thing or six to say about the AIB final but should have more time to word it properly tomorrow.

Wasn’t that just the most impressive display you’ve ever seen?

And I’m referring, of course, to my skills of prediction, when I said that Leinster could win if they got Luke Fitzgerald the ball to hand AND matched their defensive display they showed against Quins.

Seriously, though, to the match itself, what impressed me most is that although the first ten minutes went exactly the way the last two derby encounters went, Leinster were able to pick themselves up and find their way to their gameplan.

Though their intent was shown right from the kickoff as Rocky Elsom literally flew into his first tackle, soon after we were making simple mistakes and giving away easy possession and I for one was sitting there thinking it was to be a long evening.  These feelings were compounded when Contepomi missed his opening kick.

But something seemed to stir within the Leinster ranks at that point.  They were able to dig deep and show a determination not to capitulate and reinforce their “ladyboys” tag.  This was first demonstrated by the Argentine's unlikely drop goal to open the scoring.

This new belief was also shown, albeit with negative results, by Cian Healy when he received his yellow card.  There was no way we were going to match Munster on the day without our forwards getting right down there in the muck with their opposite numbers and duking it out.  Healy is just a bit inexperienced at covering it up, that’s all.

Still, it was in that ten minutes Healy was off the park that we showed our mettle, and with the drop goal making it a 3-3 tie over that period, there really was no looking back afterwards.

Now I was as disappointed as the next guy when Felipe limped off, particularly as it could have been his last ever appearance in blue and gold, but for some reason I had feelings of confidence in his replacement Sexton, despite the fact that I’ve been bemoaning him all year for not being ready, and despite the fact that he missed his first kick after coming on.

He seemed to be as comfortable with his ability as the rest of Leinster’s 22-man squad on the day, and as wonderful as the link up between Nacewa and d’Arcy was for the opening try, what I will always remember is the way Sexton got right up in his predecessor O’Gara’s face right after the touchdown to celebrate.

Naturally, no Leinster fan in their right mind would have thought an 11-6 scoreline was enough at halftime, but the moment that broke the match was when we FINALLY involved our wingers in a backline passing move and between them Horgan and Fitgerald bamboozled their Munster counterparts and actually had them up against the wall.

Now it was time for our famed defence from The Stoop to kick into gear.  What absolutely incredible tackling we displayed, particularly from Heaslip, Drico and the most unfortunate omission from the Lions Squad, Gordon d’Arcy.  Had he been playing since the beginning of the season, or even if McGeechan had postponed his announcement to next week, he would definitely be travelling to South Africa.

And so we held out a momentous dozen-plus-phase attack in our 22 from the reigning Heineken Cup holders, and shortly after we had the game’s crowning moment, the piece-de-resistance, which Hollywood script-writers couldn’t have imagined better.

I mean – how fitting was it that the two most renowned Munster players, ROG and POC, would try to link up on a pass only for it to be pinched by BOD who then sprints the length of the pitch for the clincher???

Now, it’s time to address a certain Mr Alan Quinlan.  I watched RTE’s replay of the game Saturday evening (owing to newborn-baby-inspired-lack-of-social life) and I can tell you this – the man was not merely guilty of gouging Leo Cullen’s eye.  He was throwing punches at virtually every ruck, and the fact that Sky’s cameras caught his transgressions so blatantly gives the Lions selectors a real headache over the coming days.

While on the one hand, Quinlan should definitely be punished, you have to ask yourself if his style of aggression could be just what the Lions need against the World Champions in June?

The best compromise, in my view, would be to ban him, but only from future Heineken Cup matches since the infringements happened in that competition.

But enough of what happens to Munster players.  It’s what lies ahead for my Leinster squad in Edinburgh on May 23 that takes precedent.  Sadly it is unlikely that I will be able to travel, but you can be sure that I will be watching every kick of the action from start to finish whether it be against Cardiff or Leicester.

Congratulations yet again to Michael Cheika and the boys for delivering such a world class performance which on its own must surely make everyone who bought a season ticket, for both this campaign AND next, feel like they’ve gotten their money’s worth and more.
at May 02, 2009