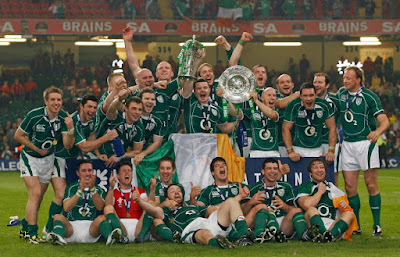 Apologies for taking so long to type out this post - it was a long pissup of a weekend followed by an abrupt return to work Monday morning!!!

What can I say about this match that hasn't already been said?

The very fact that the score remained 0-0 for so long highlighted the tension that was there for all to see.

I can't explain it - maybe it was the fact that it was my birthday, maybe it was a sense of destiny, but even at halftime when we were 6-0 down I somehow knew we were going to win.

But guess what…no sooner does the second half kickoff, than we scored.

But wasn't that the most anti-climactic try you've ever seen? From the angle on the telly, it didn't look like anyone had crossed at first. Even the Ireland players didn't seem to celebrate.

Yet once you saw the first replay, you knew the almighty BOD had done it again.

Then practically from the kickoff we're at them again, and what a take & run from Tommy Bowe! WHO PLAYS HIS RUGBY FOR THE OSPREYS!!!

Wonder what his next club training session is going to be like?

Bish-bash-bosh, it was 14-6, and we started to feel it now. And what’s more, I stretched my destiny theory even further when I made the bold statement : "There is absolutely NO WAY they're crossing our line".

Everyone around me remained silent. They were probably cursing me in their heads and getting ready to rip my jinxing ass apart should the result have gone against us.

Though as it turned out, had Stephen Jones' last-gasp effort gone over, they would have beaten us WITHOUT scoring a try.

But if you ask me, it was a gust of wind driven by the ghosts of the 1949 team that made that kick fall short.

And let’s not forget that the miss is not what Jones should be brooding over.

It was him kicking to touch on the full having had the ball passed to him from outside his 22 that gave us the attacking line-out which led to Ronan’s historic drop-goal.

I don’t know about you, but that is one ELV I hope never gets changed!!!

So in the end, not even Wayne Barnes' ludicrous awarding of 15 penalties against us as opposed to 5 against the home side could stop us.

And when the final whistle did blow, the fun could begin.

Everyone in the pub was shouting and jumping and hugging.  Even the gob-daws who kept opening the door and blocking our view of the tellies were forgiven.

A mate of mine banged his head on the corner of the ceiling above him after jumping and excitement, but he didn't care.

The Slam is ours, and sure isn't it grand.

I'll do a review of the Six Nations tournament as a whole later in the week, but for now, let's just enjoy this wonderful feeling and remember how proud we are to be Irish.
at March 21, 2009

Email ThisBlogThis!Share to TwitterShare to FacebookShare to Pinterest
Labels: Wales

Why are we all obsessing over the Grand Slam???

Sure, it would be great to win it, but let’s remember this…the Six Nations is a tournament whereby everyone plays everyone else, and one nation finishes top of the pile. THAT’S what they’re playing for.

In other words, topping the table is the cake. Winning all the matches to do so is merely the icing on the cake.

Next Saturday, on what happens to be my 40th birthday, Declan Kidney’s men line out at the Millenium Stadium to face a Wales side which although not quite at their best of late has still tasted that same icing twice in the past five years.

Thanks to the result from Twickers yesterday, Warren Gatland’s men have to win by at least 13 points to become Champions. And surely we all know they are well capable of doing that if we’re not up to scratch on the day.

But if we play defensively for 80 minutes in Cardiff the way we did in Murrayfield on Saturday, victory will be ours.

There was absolutely NO WAY the Scots were going to cross our line. It just wasn’t an option. If you don’t believe me, just look at a replay of Tommy Bowe’s tackle on Evans quickly followed by Drico’s one on Godman right before the interval. Let’s face it – our ability to stop opponents from scoring tries is what has us where we are in this tournament.

I call it “The Gandalf Defense”, since the message the boys send is quite simple…”YOU…SHALL…NOT…PASS!!!”

Now I don’t care if I show some Leinster bias with this statement, but the only thing that kept the Scots in this match was our giving away needless penalties in Patterson’s kicking range (which is practically anywhere on the pitch – Lord only knows why they haven’t started him in every match), with David Wallace and John Hayes being the regular culprits.

And before the Munster-ites put a hit out on me, of course the man-of-the-match award was well deserved by Peter Stringer, and hopefully he’ll retain his spot for next weekend. I reckon he brought ROG’s open-play game up a notch and gave him the boost he needed to get his kicking boots back as well.

As for what side I’d play in the big decider, well I twittered my opinion at the final whistle, and although I had about seven pints on me at that stage, it remains unchanged. The XV that were on the park when Jamie Heaslip scored the decisive try should line out at kickoff in Cardiff.

Didn’t it just say it all when Jamie gave his celebration prior to touching down? Like I said during the week, I felt he was a victim of provincial politics in being left out of the side, and surely must start because unlike Leamy the Leinster No 8 must stand an excellent chance of claiming a Lions starting jersey.

So let’s look forward to what could be an historic occassion next weekend, and remember – what we want most of all is to see Brian O’Driscoll lifting that massive trophy around 7:30pm. That would be the best birthday present I could wish for.

Back in July 08, right before this season began I did a post entitled “How Will BO’D be remembered?”

I asserted that our esteemed international rugby captain should in no way be assured of a starting spot on the Lions at the time and the thrust of my argument was in this statement :

…I believe the upcoming season is crucial for BO’Ds legacy. He needs a string of outstanding performances, he needs his name regularly in the back page headlines, he needs to be the inspiration to meaningful silverware for his teams.

Well we had the wonder try against Wasps. A clever little shimmy to go over versus France. A sprint the length of the field in Rome.

And on Saturday, the pièce de résistance to grace Ireland’s Six Nations swansong from Croker – an 80 minute display that was rugby’s answer to cricket’s “a captain’s innings”. So now I can’t see how McGeechan could possibly leave him behind.

Sure, ROG wasn’t at the races with the boot. If his misses had gone over it would have been a 12-point victory just like I predicted. But if this is a team which has its eyes on winning it all, it needs to know it can do so even when we’re not firing on all cylinders.

You didn’t have to be wise enough not to put tomatoes in fruit salads to know that England were going to do all they could to frustrate us on the day, and in my view, they did a pretty good job of it all told.

Our skipper seemed to bear the brunt of their attention. First Flutey rings his bell. Then Armitage gave him a block which had me out of my chair ranting and raving at the television screen, though sadly I wasn’t able to persuade the ref to produce his card.

But despite O’Driscoll constantly holding his head, he wasn’t afraid to put it down and charge at the English defence to touch down for the match-winning score, which turned out to be the difference.

And as for his drop goal…well if the sheer opportunism made it sweet, the execution made it sublime. I don’t get the rules of rugby enough though – seemingly there would have been a yellow card for an Englishman if he had missed? Surely if there’s an infringement worthy of a card it should be issued regardless???

Now…as for overall performance, well, I really hope that Declan Kidney has seen enough of Paddy Wallace to realise he’s not the man to have at centre. To bring home this particular bacon, it’s time to reunite Drico and Darce.

Remember, it was the Ulsterman who coughed up the ball late on and it eventually led to their try which made it so close. So he’s had his 80 minutes now, coach, ok?

Other than that, I see no reason for this team not to remain focused and get the job done in both Edinburgh and Cardiff. And nice and all though the Grand Slam may be, I don’t know about you but the Championship itself would do me just fine.

It looks like my 40th birthday, which is the day the potential Six Nations decider between Wales and Ireland is played, is going to be one hell of a day.