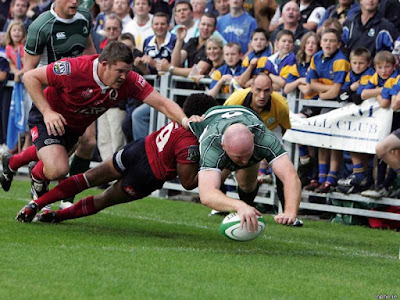 I watched this match from two perspectives…on the one hand I wanted to see how the 2008/09 version of the Leinster squad shaped up for the new season, while on the other I was interested in what kind of overall service was being provided for me, the season ticket holder.

When it comes to the performance on the pitch, I can hardly complain about a 48-19 drubbing, can I? Well, actually, I can.

You can only really analyse a match like this based on the opening 40 minutes, since the second is full of endless chopping and changing as the subs bench on both sides gets emptied to give everyone a run.

So with that in mind, Leinster only barely won the first half thanks to a Cian Healy try in injury time. What made things close against a decidedly average touring side was extremely dodgy defence coupled with Felipe Contepomi leaving his kicking boots back in the dressing room.

I wouldn’t worry about the kicking so much, but it has to be said the Leinster tacklers parted like the Red Sea for every try by the visitors, and this is something that has to be ironed out, and of course this is exactly what this type of match is for so there is plenty of time to put this right.

Now – going forward, things were much rosier. New boy Ica Nacewa shows a great awareness on the attacking side of the ball, though I’m not altogether sure I’d prefer him in the #15 jersey to Girvan Dempsey. In the centre, O’Driscoll and Felipe chugged away, but rarely broke the line.

I was glad to get a good look at Sexton at fly half, and if I had to find fault with his game I would say he needs to assess his options a fraction more – every time he went to kick the ball his body language telegraphed his intentions in such a way that perhaps a touring second-string Super 14 side wouldn’t pick up on it, but a first-string Heineken Cup side most definitely would.

In the pack, Jamie Heaslip was as commanding as ever, and though I had never heard of new second row Devin Toner before, he showed he is more than capable of filling in for either O’Kelly or Cullen should the need arise. Jowitt was his usual pesky self on the fringes, and overall the forwards earned themselves a few impressive pushover tries, although I wonder if the new ELV’s which allow you to drag down the maul will make this ability moot once the real season kicks off.

Best attacking move had to be Kearney’s try. The move began with Reds possession inside the home 22 and a couple of fly-hacks from O’Driscoll (the second actually taking the ball out of Contepomi’s hands) sent the ball right down the other end where our international right winger took full advantage of a couple of lucky bounces to make the score look a lot easier than it was.

So when all is said and done, Leinster played like the Meaningless League Champions they are, there are still some kinks to be ironed out, and hopefully our first four outings will get them ironed out before we travel to Murrayfield on October 11.

Now…how about the way I feel Leinster rugby treated their customers…you’d like to think, would you not, that when you buy a seat for a match or indeed any event, that it actually exists???

Well as you can see, in Donnybrook stadium, there actually is no Block E, Row N, Seat 23, so I guess I was expected to park my behind on that menacing-looking bolt sticking up out of the ground! Luckily, there was noone in seat 25, so we got to watch the match ok, and since this was the only match to be played there all season, I didn’t see any reason to complain (besides – with about 4 quick pints on me I couldn’t guarantee that my complaint would make any sense to the stewards!).

Still, whether it was the fault of Leinster rugby, Ticketmaster or the owners of the stadium, it was a bad show.

As for the atmosphere in the ground, well, there wasn’t one. I guess Leinster rugby fans aren’t pre-disposed to showing any kind of unified support for their team. There was one chorus of the awfully dull “LEHHHH-nster, LEHHHH-nster” from the opposite terraces in the first half but since then except for some individual cries of encouragement the rabble were never sufficiently roused.

For this I have to lay the blame at Leinster rugby’s door, since they pay a guy to climb into a lion suit and I presume his job is to get the crowd going. Well, he didn’t, at least not today. Perhaps much like our defence, the mascot has some pre-season kinks to be ironed out.

As an example…when Bernard Jackman touched down for his try as you can see in the leading picture, there should have been a chorus going through the crowd of the Batman theme “de-na de-na de-na de-na JACKMAN!!!”. But all that happened was a clip over the intercom of Chelsea Dagger by the Fratellis (who hail from Glasgow – wouldn’t something like U2’s Elevation be better?), and this was reeled out after every Leinster try and got a bit tedious.

And though I know he missed a lot of kicks, what happened to the Spanish-style trumpet-blast that usually follows when Contepomi does get the ball over the bar?

These are all subtle touches that would turn a match like this one into a memorable one and more importantly, turn the 10,000 season ticket holders they keep boasting about into a 16th man much like they have down in Thomond Park.

And as for the whole environmental message supposedly encouraged on the day, I really, honestly truly think it was lost on the supporters. Well think about it – trying to get all green with a crowd of people the majority of whom came to the match in their SUVs isn’t really going to make much of an inroads, is it? But I suppose their heart was in the right place.

Now I know I’ve gone with a lot of negative in this piece, but I’m still looking forward to the new campaign, and hopefully things will improve as the season goes on. JLP
at August 31, 2008

Leinster kicked off their pre-season preparations with a resounding 38-5 victory over Padova in Italy on Wednesday evening.

The province started strongly with the impressive Isa Nacewa crossing for his first try in Leinster colours after good work from Stephen Keogh and Cameron Jowitt in the 10th minute. Jonathan Sexton added the points to give the visitors a 7-0 advantage.

The hosts rallied and clawed their way back into the game with a try four minutes later, but the Magners League champions held on to a slender two-point advantage at the interval.

The visitors raced out of the blocks after half-time and Gary Brown gathered a delightful 46th minute cross-field kick, passed to the supporting Felix Jones, and took the return catch to score an effort which was converted by Nacewa, who assumed kicking duties.

On 51 minutes, a break on halfway from Nacewa, where the former Auckland Blues star beat several defenders, concluded in an offload to prop Jamie Hagan, and the former Gormanston College man crossed over.

Eight minutes later Simon Keogh gathered a bouncing ball from another clever cross-field kick, this time from Ireland international Luke Fitzgerald, to add his name to the score-chart. Nacewa, who reverted to out-half on the interval, again added the points.

With ten minutes to go, former Leinster Under-20 captain and second row Conor McInerney benefited from a wonderful take by Devin Toner, and a strong maul by the pack, to cross over, though his conversion was missed by substitute Kyle Tonetti.

Tonetti would later make amends by adding to a Fitzgerald effort in the closing minutes after replacement prop Stan Wright offloaded to Kevin McLaughlin who fed McInerney, who then found Enniskerry man Fitzgerald, who ran in to out-pace the defence.