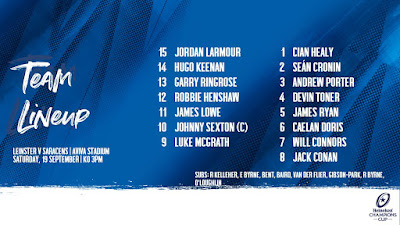 The third Pro 14 title in a row to extend a winning streak to 25 was awesome and all, but like I said in my writeup of the final, as arrogant as it might sound, it has all been leading to this match kicking off at 3pm on Saturday.

Only the Rugby Gods could be cruel enough to pit us against Saracens in the last eight after such a comfortable pool campaign.  It can be spun so many different ways - Pro 14 champs vs bottom team in Premiership being one, although anyone that knows anything about the game will tell you this is really about avenging what happened in Newcastle in May 2019, after which the winning run began.

During the week as part of our “Opposition View” series on The HarpinOnRugby Podcast, I spoke to Sarries fan Debbie Knight and one thing I got from the chat is just how strong their squad is even without Owen Farrell.  Alex Goode has just passed 300 games for the club and will be more than capable of deputising, and to go with the test Vunipolas Mako and Billy on the pitch, there’s another in out-half Manu ready to spring from the bench.

But what really needs to be respected about their team is not the individuals, more how they play together, especially on defence.  And we Leinster fans should know a thing or six about that since it is often said about us, and not just on these pages.  So let’s crack on with looking at our matchday 23.

What I like most about it is how settled the overall look is.  Much has been said about the way we use over 50 players a season but with the exception of the first meeting with Ulster since the break, the core of the team has pretty much stayed the same.

Again I have to give kudos to Hugo Keenan for making it through the four weeks to retain his starting role in Europe.  I’ve harped quite a bit about how solid our defensive wall has been, especially the past two weeks when we conceded only 8 points in 160 minutes (all in the first quarter) but a lot of the credit also goes to our back three who have handled the aerial onslaught very well.

But there are other ways we can hand our opposition chances, and top of this list has to be our lineout.  Rónan Kelleher drops down to the bench which is a really good chance for Sean Cronin, and while his ball carrying and scrummaging will be important, every Leinster fan will be crossing fingers, toes and eyes every time he has a dart to throw.

And as it has oft been said, responsibility does not just fall on the hooker for this crucial set piece to go right - the timing from his fellow forwards also needs to be spot on though in fairness with Toner making the calls and Ryan, Conan and Doris among the options we should be well set.

If we can get those platforms right, it should allow Mr Sexton to get that backline singing.  He’s also brimming with options and I really like what I have seen Henshaw & Ringrose bring to the table since the break.  And then there’s James Lowe.  You could say he has been quiet by his standards, but then again his involvement at the beginning, middle and end of our opening try last Saturday shows what he can do at the right moment.

The matchups all over the park are close but if anything we have the edge at most positions; the fact that we can afford to move last week’s Player of the Match to the bench and leave Scott Fardy out altogether speaks volumes.  Ahead of the Pro 14 final I was worried about us giving away penalties at midfield because they could turn them into tries from close lineouts - as it turned out, our defence was able to hold them out.  This time, however, we have Elliot Daly in the mix so those same pings could well become three points every time so we still need to stay on the right side of ref Pascal Gauzere.

Speaking of the official, that will be an interesting aspect of this fixture.  Much was made about the interpretation of the breakdown since the return from the COVID break but with Leinster having faced just two Irish opponents in those four weeks and just two different refs, I’m hoping the change isn’t too drastic for us.  Though in fairness, Sarries have only had the English men in the middle themselves.  Hopefully that won’t be a factor for either side.

Now to stick the head over the parapet...the bookies have us winning by 9 points.  As always, I hate those predictions for such a massive knockout contest.  I believe Sarries will really come at us - with Mark McCall behind their strategy and literally nothing else for them to play for in over a year, we’ll have to be at our best.

But for all the talk of us losing a lot without the roar of the blue flag-waving army at the Aviva Stadium, the fact remains this will be our fifth week in a row playing their under these conditions, so if anything that will be to our advantage.  My heart says we’ll win relatively comfortably, but I’ll go with my head and say it will be close enough with a Leinster win by 4-6 points.

As with every match since rugby returned, it’s a shame we can’t be there in person, but hopefully we’ll all be able to get to a screen somehow.  If you don’t have BT Sport, RugbyKino put a good suggestion on our Facebook page - “I'm looking at getting a Now TV day pass for €10 and streaming it from the laptop or phone. If Leinster get through to the semis it'll be on Virgin Media One as well as on Channel 4, so no need for the monthly pass*.”

Fingers crossed we’ll all be glued to those channels next weekend!!! And of course best of luck to the Ulstermen on the Sunday in Toulouse.  JLP

* = FYI neither of us is being paid to say that about NowTV...just passing on info

Start your day with five eye-catching egg-chasing quotes & links from around the ruggersphere.
ICYMI click here for our weekly list
of upcoming rugby on Irish TV

Alex Goode, the most likely candidate to replace Farrell, operates at a different volume.
Leinster v Saracens: Will Owen Farrell absence prove key to Champions Cup result?
Mike Henson - BBC Rugby
...it is anticipated that the IRFU will “continue to burn at least €5 million a month”, primarily on professional game wages and costs.
IRFU losses due to Covid expected to exceed €300 million this year
Michelle Hennessy - The42.ie
"We’ve got confidence following our performances in the Six Nations...but there’s plenty to build on so we’re in a good space to push forward."
Ireland captain Ciara Griffin on her packed schedule
Sarah Mockford - Rugby World
“The EPCR Board has unanimously agreed to a change in the tournament rules which permits the registration of front row players after the September 1 deadline”
EPCR alters rules as Saints sign Alex Seville
Planet Rugby
...the Englishman didn't exactly do himself many favours by being sent off recently and banned for five weeks after a dangerous tackle
Alun Wyn Jones replaces Owen Farrell as favourite to captain the Lions amid recent shift
Mark Orders - WalesOnline
Feel free to share any interesting links you spot yourself about t’internet by email, Twitter, Facebook, blog comment or carrier pigeon – whatever works for you. JLP
Note - views expressed in "Front Five" links do not necessarily reflect those of HarpinOnRugby
at September 18, 2020 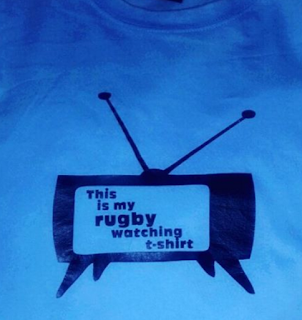